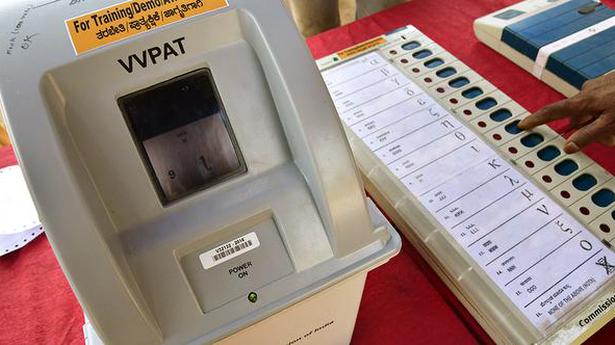 For the first time, all booths are equipped with VVPAT machines along with the electronic voting machines to ensure the voters that their votes go to their preferred candidate.

Here are the key things to know before casting your vote:

Mobile phones are not allowed in polling booths.

In the absence of an EPIC card, voters need to carry one of 12 documents prescribed by the Election Commission to vote. These include passport, driver’s licence, service identity card, bank/post office passbbok, PAN, smart card issued by RGI, MNREGS job card, health insurance smart card issued by Ministry of Labour, pension document with photo and Aadhaar.

Upon furnishing ID proof, the officials will verify it against the electoral rolls and put an indelible in mark on the voter’s finger

Once the vote is cast, a red light will glow next to the button he/she pressed, following which a VVPAT will show up on the machine kept next to the EVM.

The VVPAT will be displayed for seven seconds after a vote has been cast.

In case there is a mismatch between between the vote cast and the VVPAT, the voter can approach the presiding officer and lodge a complaint.

The presiding officer will then call all booth agents and cast one vote on the EVM, this will not be counted.

If the mismatch persists, the polling process will be stopped and the EVM will be replaced.

However, if there is no mismatch, the polling will continue and an FIR will be lodged against the voter for lodging a false complaint.

The Christchurch mosques terror attack claimed a third life from the State as it came to light that a student from Hyderabad succumbed to his injuries. A tweet from the official handle of the India High Commission in New Zealand named Ozair Kadir in a list of five people who passed away. He was in […]

With the agriculture sector in the State reeling under the onslaught of the COVID-19 pandemic, farmers’ leader and Swabhimani Shetkari Sanghatana (SSS) chief Raju Shetti has called for relaxation of the lockdown in rural areas after April 14. Dr. Ajit Nawale of the All Indian Kisan Sabha, meanwhile, has urged the government to ensure middlemen […]

Only one key LeT operative now in Pakistan jail

LeT chief Hafiz Saeed and co-founder Amir Hamza are currently said to be operating from their homes in Lahore Source: thehindu.com Related