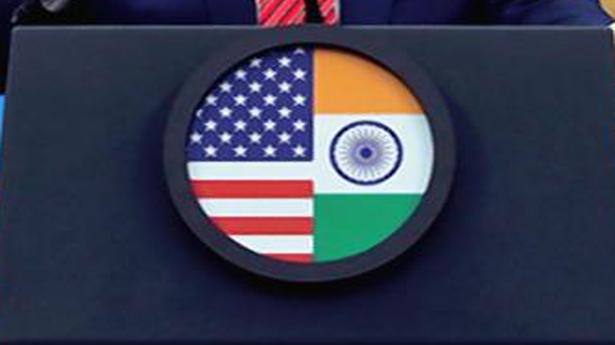 In a rare move reflective of India-U.S. friendship, the Trump administration replaced the presidential seal with an “India-U.S. dosti flag” emblem on the presidential lectern. This was a pleasant surprise to many at the ‘Howdy Modi’ event.

As a matter of tradition, every lectern from where a US President speaks — be it a joint press conference or an election speech or any speaking engagement either domestically or overseas — carries a presidential emblem.

However, for a change and to the pleasant surprise to many, the presidential lectern had a circular emblem with the national flags of both the US and India.

Prime Minister Narendra Modi and US President Donald Trump on Sunday addressed the mega ‘Howdy, Modi’ event here with over 50,000 Indian-Americans present at the NRG stadium.

The event has been organised by Indian-Americans in Texas for Prime Minister Modi.

This is for the first time that the leaders of the two largest democracies of the world were addressing a joint mega rally in the U.S.

Family of Unnao rape victim opts for burial, memorial to be set up

The body of the Unnao rape victim, who died of burns in Safdarjung Hospital in Delhi on Friday, was brought to her village late on Saturday. The victim’s brother and other relatives reached the village with the body after 9 p.m. to an emotional outburst from the assembled crowd, which included leaders of the Samajwadi […]

How to vote in VVPAT Electronic Voting Machine?

For the first time, all booths are equipped with VVPAT machines along with the electronic voting machines to ensure the voters that their votes go to their preferred candidate. Here are the key things to know before casting your vote: Mobile phones are not allowed in polling booths. The booth slip is not mandatory. The […]