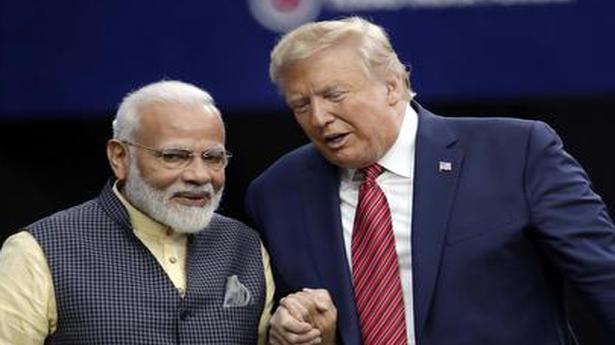 Prime Minister Narendra Modi on Sunday cheered for Donald Trump’s 2020 re-election bid at the ‘Howdy, Modi’ event here, saying ‘Abki Baar, Trump Sarkar”, as the U.S. president joined him at the mega gathering of over 50,000 Indian-Americans.

At the event, Mr. Modi and Mr. Trump clasped hands as they took the stage to a mix of drumbeats and cheers. Many spectators in the crowd of wore white T-shirts that proclaimed: “Howdy, Modi.”

Mr. Modi introduced Mr. Trump as “my friend, a friend of India” and as someone who “has left a deep and lasting impact everywhere.

Mr. Trump returned the compliment during his remarks, lavishing praise on Modi and calling him “a great man and a great leader.”

Welcoming Mr. Trump, Mr. Modi said, “We have met a few times, and every time he has been the same warm, friendly, energetic and accessible. I admire him also for his sense of leadership and passion for America.”

Mr. Trump, a Republican, has already announced that he will seek a second term at the White House in the general elections in 2020.

The West Bengal Urban Development Minister has received the required sanction from the Ministry of External Affairs (MEA) to attend the C40 Cities Climate Summit in Copenhagen, Denmark, even as Delhi Chief Minister Arvind Kejriwal was yet to receive clearance for the same, Delhi government sources claimed on Monday. According to sources, Mr. Kejriwal is […]

China hopes Malabar naval drills will be conducive to peace, not contrary

The country has been suspicious about the purpose of the Malabar exercise as it feels that the annual war game is an effort to contain its influence in the Indo-Pacific region. Source: thehindu.com Related