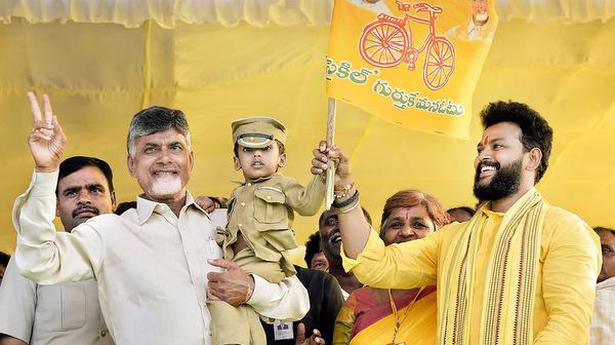 Chief Minister N. Chandrababu Naidu on Saturday said there was a huge wave in favour of the TDP across the State, thanks to the good governance and welfare schemes of his government.

Developmental activities would continue without any break only if the TDP was voted to power again, Mr. Naidu said while addressing public meetings at Itchapuram, Narasannapeta, Rajam, Etcherla and Srikakulam.

During his whirlwind tour of the five Assembly constituencies in the district, Mr. Naidu exuded confidence that the TDP would win at least 150 of 175 Assembly seats in the State.

Lashing out at YSRCP president Y.S. Jagan Mohan Reddy, the Chief Minister said the Opposition leader was unfit to be at the helm as he had many criminal cases pending against him.

Seeing a conspiracy to destablise the party and the State, he said, “Prime Minister Narendra Modi and Telangana Chief Minister K. Chandrasekhar Rao are providing financial assistance to Mr. Jagan Mohan Reddy to help him win the elections by hook or by crook.”

Claiming that farmers were happy with the loan waiver and other schemes meant for their welfare, Mr. Naidu said, “The TDP government has accorded top priority to irrigation in Srikakulam district. Vamsadhara Phase II and modernisation of Nagavali will improve the irrigation facility in the district and check migration too.” During the roadshow at Rajam, Mr. Naidu urged people to vote for Kondru Murali Mohan, and said he had given a new look to the industrial town when he was the Minister.

Mr. Murali urged the Chief Minister to take steps for the revival of sick industries in and around Rajam.

Reviewing the party prospects later, Mr. Naidu suggested TDP State president, Energy Minister and Etcherla candidate K. Kala Venkata Rao, Srikakulam candidate Gunda Lakshmi Devi and others to reach out to maximum number of beneficiaries and ensure the victory march of the TDP in the district.

Thanks to the hectic lobbying conducted by TRS leaders to woo other party contestants to withdraw from contest, the TRS candidates continued to be elected unanimously in Rajanna-Sircilla, Husnabad and Korutla municipalities on Tuesday. In Rajanna-Sircilla district which is represented by Minister for Municipal Administration K Taraka Rama Rao, three more candidates won unopposed following […]

The All India Seafarer and General Workers Union claims that around 1,500 crew members from India have been stranded at the U.K. ports across these ships. Source: thehindu.com Related

‘It took one Modi to correct a historical wrong’

Asserting that abrogation of Articles 370 and 35-A was aimed at achieving national integration and giving back the fundamental rights to the people of Jammu & Kashmir (J&K), BJP national general secretary Ram Madhav said his party had been saying that it was against those Articles since the days of Bharatiya Jana Sangh and it […]