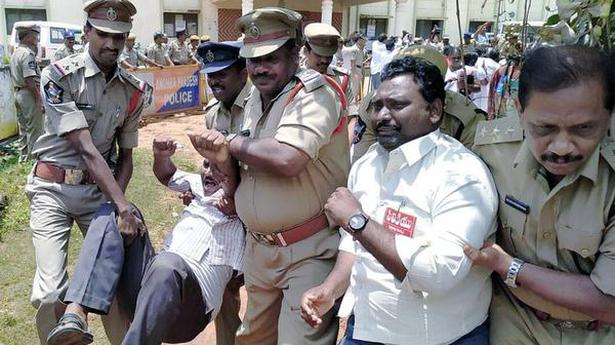 Hundreds of contract ANMs serving under the National Rural Health Mission on Tuesday staged a sit-in here protesting the State government’s decision to recruit new ANMs at the village secretariats without regularising them.

The contract ANMs from across the Krishna district staged the protest and attempted to gain entry into the buildings of the District Medical and Health Office in Machilipatnam, under the banner of AP Government Contract ANMs Union and CITU.

In Andhra Pradesh, an additional single ANM is in service, covering the population of above 2,500 by assisting the permanent ANM.

“Regularisation of the contract ANMs is one of the promises made by Chief Minister Y.S. Jagan Mohan Reddy during his padayatra. However, the Secretariat issued a notification for the recruitment of 13.540 ANMs, ignoring the promise of our regularisation,” said Ms. Vijaya Lakshmi.

The police arrested the protesters to avoid any untoward incident. Nearly 300 ANMs and other protesters were arrested.

Various women rights organisation staged protest demanding justice to the Unnao rape survivor, who succumbed to her burns in Delhi on Saturday. The rape survivor was allegedly set on fire by five men, including two of the accused who were out on bail, on Thursday, while she was on her way to the court from […]

Becoming Moothon’s Mulla was not easy for Sanjana Dipu, it took some work shifting gears from being a 17 year-old girl to a 13 year-old ‘boy’. “The only similarity was that Mulla is a very hopeful child like me…we are both helplessly hopeful!” says the 19 year-old actor, whose first film this is. Moothon, directed […]