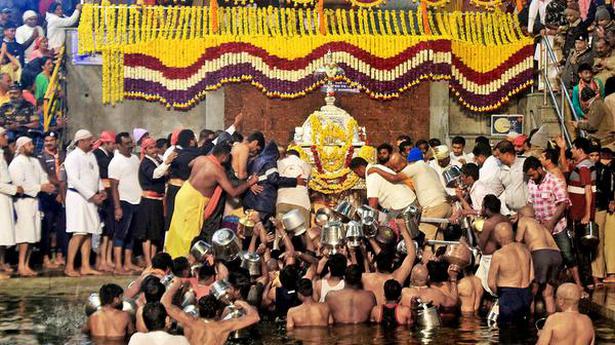 Hundreds of devotees witnessed ‘Teerthodbhava’ at Talacauvery, the birthplace of the Cauvery in Kodagu, in the early hours of Friday.

The ‘tirtha’ or the holy water gushed out from ‘Brahma Kundike’ (a small pond) two minutes before the specified time at 12.57 a.m., much to the delight of pilgrims who had thronged the shrine to watch the annual event.

As the holy water gushed out from the ‘kundike’, which is said to be the source of the Cauvery, devotees rushed to the pond to see the occurrence, raising slogans hailing Cauvery, even as the priests sprinkled the holy water on the people. Pilgrims took a holy dip in the main pond and jostled with one another to collect the holy water.

Incessant rain did not deter the enthusiasm of devotees who had come from various parts of the State and also from neighbouring States. Prior to the event, the priests conducted a series of rituals at the shrine.

As per the Hindu almanac, the time specified for the emergence of ‘tirtha’ was 12.59 a.m.

Compared to previous years, the number of devotees this year was low. Special buses had been arranged to Talacauvery since Thursday.

Authorities had banned plastic bottles and plastic pots inside the shrine for collecting the holy water. Devotees, therefore, had brought steel and copper containers.

Minister in charge of Kodagu district V. Somanna, Minister for Revenue R, Ashok, and K.G. Bopaiah, MLA, were among those present.

The event was telecast live on LED screens outside the shrine. Special parking arrangements had been made for vehicles on the foothills.

Special rituals were performed at Talacauvery temple and Sri Bhagandeshwara Temple at Bhagamandala, which were specially decorated for the occasion.

Bengaluru Mayor M. Goutham Kumar, who was also present, announced ₹1 crore from the Bruhat Bengaluru Mahanagara Palike for development of Talacauvery. Bengaluru is one of the beneficiaries of Cauvery waters.

Security had been tightened at Talacauvery. Three Deputy Superintendents of Police, eight inspectors, 15 sub-inspectors, and over 500 policemen had been deployed. CCTV cameras had been installed at key locations.

The fire brigade had stationed vehicles and ambulances as a precautionary measure. A medical team was also in attendance.

As orange alert had been declared since Thursday night in Kodagu, there was a drop in the number of tourists as well.

The moon-bound Chandrayaan-2 spacecraft underwent a crucial orbit manoeuvre at 9:02 a.m. on August 20 morning, announced the Indian Space Research Organisation (ISRO). It was carried out using the onboard propulsion system and the spacecraft is now at 114 km x 18072 km orbit. The move, called the Lunar Orbit Insertion, makes the spacecraft capture […]