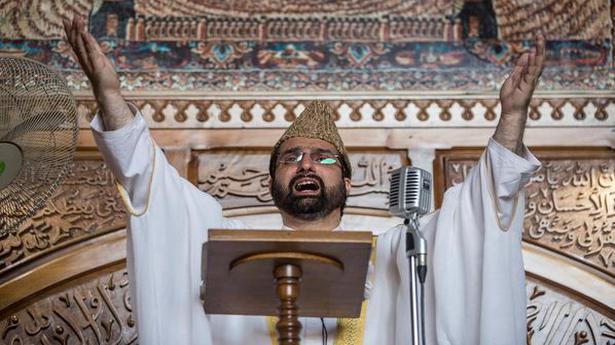 Hurriyat chairman Mirwaiz Umar Farooq not to present himself before the National Investigation Agency (NIA) in Delhi on Monday and will instead submit a written reply to the investigating agency, said a Hurriyat spokesperson.

The Hurriyat spokesperson told The Hindu that the Mirwaiz, following a legal advice, has decided to submit a written reply to the NIA.

Last week, the NIA served a notice to the Mirwaiz, which reads: “It appears you are acquainted with the circumstances of a case under investigation by the NIA. You are required to report before the NIA on March 11 at 10:30 a.m. for the purpose of your examination.”

The NIA notice comes just 11 days after an NIA raid at the Mirwaiz’s residence in Srinagar. The NIA had claimed to have recovered “incriminating documents” during the raid.

The Mirwaiz’s spokesperson Shahid-ul-Islam was among seven separatist leaders arrested in 2017 by the NIA in an alleged illegal funding case from across the border to spike street protests in Jammu and Kashmir.

The Mirwaiz is the first top ranking separatist to be summoned by the NIA.

Another Hurriyat faction chairman Syed Ali Shah Geelani’s son Naseem Geelani was also summoned by the NIA. Mr. Geelani, who works as an assistant professor at the faculty of forestry in Sher-e-Kashmir University of Agricultural Sciences and Technology (SKUAST), was earlier sent a notice in a “disproportionate assets case”.

Theft from aircraft carrier of a serious nature, says NIA

The National Investigation Agency (NIA) has re-registered the First Information Report (FIR) on the probe into the theft on board the under-construction Indigenous Aircraft Carrier (IAC) at the Cochin Shipyard Ltd (CSL) here by invoking major sections that include waging or attempting to wage war or abetting waging of war against the nation.   The […]

Leaders of major political parties in the State reacted cautiously to the abolition of Article 370 and 35A and the move to bifurcate Jammu and Kashmir into two separate Union Territories of J&K and Ladakh. While the former TRS MP K. Kavitha termed the developments as monumental changes in respect of J&K, she hoped that […]