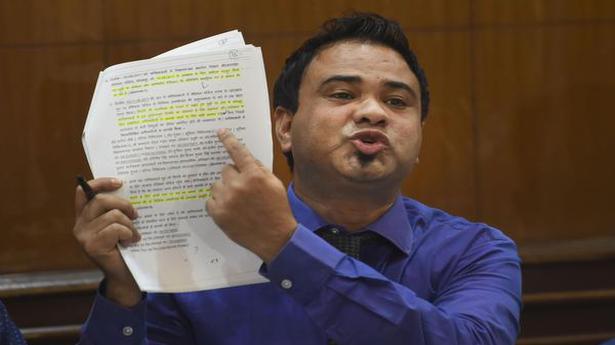 Suspended paediatrician Kafeel Khan, who has been absolved of charges of medical negligence and corruption in connection with the Gorakhpur’s BRD hospital tragedy, on Saturday demanded he be reinstated with due honour.

Addressing media persons at the Press Club of India here, he reiterated that the Uttar Pradesh government should apologise to the families of the children who died and provide compensation to the kin.

“The departmental inquiry has shown that I did not do any medical negligence or indulge in any corruption… That tag of ‘murderer Kafeel’ and infamous doctor Kafeel is off my head now,” he said.

“I demand that I should be reinstated in my job with due honour and a CBI inquiry should be conducted into the case,” he said.

About 30 children died during the night of August 10, 2017, and 34 more over the next few days, officials had said then.

Many of the infants died allegedly because of disruption in oxygen supply on the night of August 10 due to pending payments to the supplier, a charge refuted by the State government.

Dr. Khan was accused of negligence and corruption and was suspended and subsequently arrested following the outrage over the deaths at the Baba Raghav Das Medical College. His suspension is yet to be revoked.

An advisor to Chief Minister Yogi Adityanath, however, said on Friday that the inquiry has not disproved the charge that the doctor also ran a private practice.

“It is not right to say that Dr. Kafeel [Khan] has got a clean chit in the departmental inquiry. He has made a wrongful conclusion of the report,” Mrityunjay Kumar said in a statement.

Policeman injured in stone-pelting in Surat

Road blockades and stone-pelting incidents marked the Bharat Bandh, called by various organisations to protest the Citizenship (Amendment) Act (CAA), in Gujarat on Wednesday. An assistant sub-inspector was injured in Surat when a group of masked persons pelted stones at police personnel near Madina Masjid in Limbayat locality, a senior police officer said. The police […]

Portal on internship for students on cards

Telangana State Council of Higher Education Vice Chairman V.Venkata Ramana on Saturday said a State-wide portal to facilitate internships for students is on the cards. “We are shortly going to launch a State-wide Telangana portal for internship,” he said, adding the objective is to help improve access to internships for engineering students from tier II […]