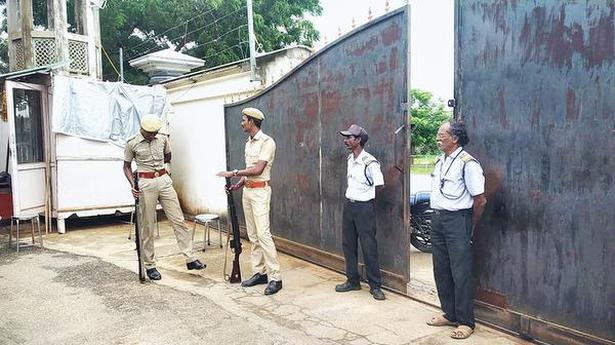 Teams from the Income Tax Department launched surprise raids on the Ekam campus, also known as Kalki Ashram and Oneness University, along the Chittoor-Tamil Nadu border, on Wednesday morning.

All three gates of the sprawling campus were shut, with entry and exit being restricted by the Tamil Nadu Police.

Eight teams of I-T officials along with policemen arrived at the ashram to conduct simultaneous searches at posh structures on the 500-acre campus. Reports said that similar raids had commenced on the establishments of Ekam elsewhere in Andhra Pradesh and Tamil Nadu.

At the time of the raids, the ‘Amma Bhagwan’ couple and their son Krishnaji were in Tamil Nadu. The I-T officials are said to be questioning a man named Lokesh Dasaji, said to be a close confidante of the Amma Bhagwan couple and the prime administrator of the campus.

The raids are attributed to the alleged irregularities in the management of funds of the Kalki Trust, coupled with allegations that Krishnaji, the couple’s son, was into real estate business with huge investments.

The raids were still on at the time of filing this report on Wednesday. Heavily guarded by police at the entrances, nobody was allowed to enter or exit the campus. Communication was also cut off as the I-T officials had confiscated the mobile phones of all the employees on the campus. No I-T official was available for comment.

Sri Bhagavan (born Vijay Kumar Naidu) established an ashram at the Chittoor-TN border where thousands of devotees began arriving from across the country. Spiritual sessions are conducted by the administrators of the ashram trust, mostly for affluent individuals and notable personalities from the film industry.

Some of the prominent political figures who have visited the campus include former TDP Ministers Ganta Srinivasa Rao and P. Narayana. The trust has launched several charity programmes in the industrial belt.

For over a decade, Sri Bhagavan, a self-styled godman, faced serious allegations of land-grabbing in the industrial belt of Varadaiahpalem and B.N. Kandriga mandals. When the ashram was established a couple of decades ago, an acre of land was worth a few lakhs, which has now soared to crores.

Sources said that during 2010-14, the ashram authorities were served notices pertaining to huge discrepancies between the ashram’s assets and its annual income tax returns.

The State government is making efforts to uplift the horticulture sector by resuming the export of produces in one or two days, said Minister for Municipal Administration, Horticulture and Sericulture K.C. Narayana Gowda. According to the Minister, the government is taking initiatives pertaining to the issue including discussing with the Airport Authority of India (AAI). […]