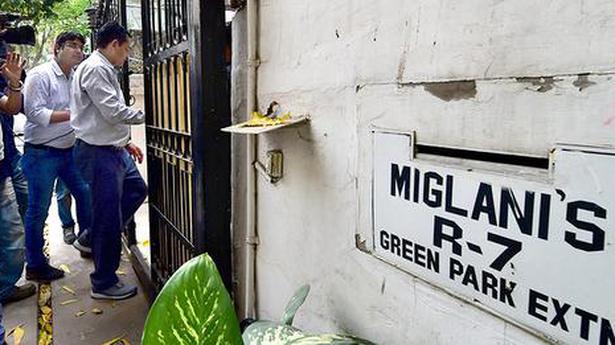 Officials said the searches, on charges of alleged tax evasion and hawala transactions during the ongoing poll season, are continuing at various premises in Bhopal, Indore and in the National Capital Region, including Delhi, as tax sleuths are gathering details and evidences.

While there is no official word on the exact amount of cash seized, sources said over ₹10 crore suspected cash has been seized till now.

At least half-a-dozen people, linked to alleged hawala dealer Paras Mal Lodha, are being questioned by the department.

The department had launched pre-dawn raids at 52 locations on Sunday on people and associates linked to Mr. Nath.

Sources had told PTI that there is a “strong possibility” of the cash recovered during the operation being used as an election inducement to fund political campaigns and bribe voters in the poll-bound State and in Delhi.

A preliminary report of the raids was also shared by the department with the Central Board of Direct Taxes and the Election Commission in Delhi.

A cash van with large-sized trunks has been sent by the department at a location in Bhopal to seize and collect the cash found during the raids, they said.

Mr. Nath had reacted late Sunday to the development. “The situation about the I-T raids is not clear yet. It would be appropriate to speak on this after the situation is clear. But the entire country knows how the constitutional institutions were used and against whom they were used during the past five years,” he had said.

“These institutions were used to scare people. When they do not have anything to say on development and their work, they used this kind of tactics against their opponents,” a statement released by the Chief Minister read.

The Enforcement Directorate (ED) has summoned former Finance Minister P. Chidambaram in connection with its money-laundering probe in an alleged aviation scam during the UPA dispensation, officials said on August 19. They said the senior Congress leader has been asked to depose on August 23 before the investigating officer of the case at an ED […]

The Congress and the BJP are engaged in a war of words over a proposed amendment in the state excise policy that will allow the sale of Indian Made Foreign Liquor (IMFL) at country liquor outlets. While the BJP is accusing the new Congress government of bringing in norms that pro­mote alcohol sale, the latter […]