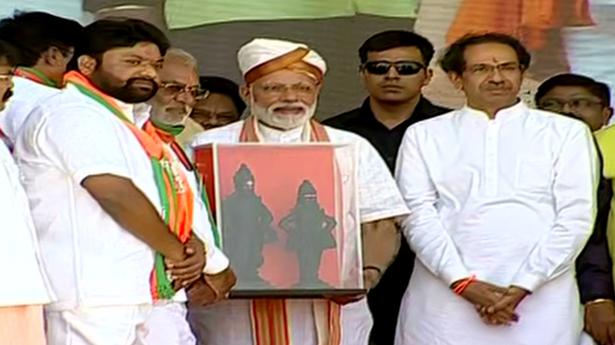 Playing an emotional card with the first-time voters of the country, Prime Minister Narendra Modi on Tuesday asked them to dedicate their first vote to the country, society and the armed forces.

Mr. Modi was addressing an election campaign rally at Ausa near Latur, where he — for the first time since 2014 Assembly elections in Maharashtra — shared a stage with Shiv Sena chief Uddhav Thackeray for a public rally. As a mark of newly-found bonhomie between the two saffron allies, Mr Modi termed the Sena chief as his “younger brother.”

The joint rally to campaign for BJP’s Sudhakar Shrungare in Latur (SC) and Sena’s Omraje Nimbalkar from neighbouring Osmanabad, drew a sizeable crowd — one of the biggest in Marathwada. The large crowd comes as a respite for the BJP which had witnessed not-upto-the-expectation crowd in Vidarbha recently.

Mr. Modi said that the first vote should be to make country strong and secure. “Your vote to Lotus or Bow and Arrow will come directly to me and no one else,” he said.

‘Raids have exposed who is the real chor’

Referring to the Income Tax department’s raids at the office and houses of Congress leaders and aides, Mr. Modi alleged that crores of black money in the form of cash has been found, which was to be used for purchasing votes. “For last six months the Congress has been saying that chowkidar chor hai. But these raids expose who is the real chor. Who is afraid of chowkidar? It has been barely six months that the Madhya Pradesh government has been formed and evidences of loot of billions of rupees have come to light. The only thing Congress does honestly is corruption,” said Mr Modi.

Attacking Congress and calling its manifesto as a wish-list of Pakistan, Mr. Modi blamed the party for the Partition. “Pakistan would not have been created had Congress remained strong in 1947. Congress says sedition law will be removed. They should look in to mirror. Talks of human rights do not suit them. You had snatched Balasaheb Thackeray’s right to vote.”

Hitting out at the Opposition, which had questioned the government citing an American media report that claimed no F-16 jet was struck down by Indian fighter jets, Mr Modi said, “Voters should teach a fitting lesson to such parties who do not trust the armed forces.”

Mr. Modi also questioned the Nationalist Congress Party (NCP) for supporting the “anti-national” Congress which allies with a “party that wants a separate Prime Minister for Jammu and Kashmir”.

“I have no hopes from Congress, but how can Sharadrao do this?” he asked.

3,000 kg of marijuana seized in Odisha

This year, Delhi witnessed four deaths daily on average because of road accidents. Nearly half of these deaths — 44% — were hit-and-run cases, suggests the accident analysis report of Delhi Traffic Police with figures updated until May 15. The numbers are down from last year though. In 2018, 637 fatal accidents and 656 deaths […]