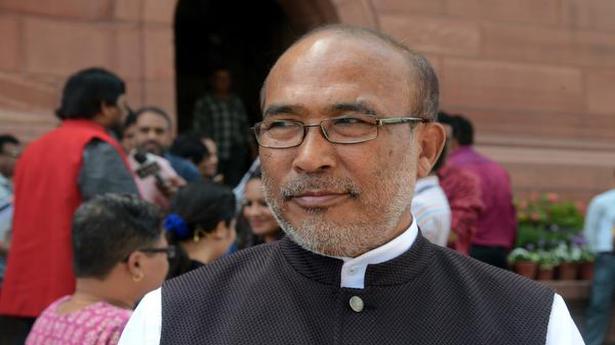 Expressing concern over the presence of Rohingya in Manipur, Chief Minister N. Biren Singh has said efforts should be made to identify the people who are facilitating their entry and providing them shelter in the state.

The Chief Minister was referring to the arrest of six Rohingya from the Tulihal International Airport in Imphal on Saturday. The six passengers had arrived from New Delhi with forged documents.

Addressing people on the occasion of Patriots’ Day on Tuesday, he said, “It indicates that many of them are taking shelter in the state and we have to find out the persons who are behind the illegal entry of Rohingya from different places.”

Urging the locals to trace Rohingya and the agents who are bringing them to Manipur, the Chief Minister said, the “already sinking” Manipuri population will disappear in the coming years, if they do not take the inititative.

Police investigation revealed that the six Rohingya were trained in a Madrasa in Delhi and had come to the state with the help of some agents based in the national capital and Manipur, DIG T. Ngasangva had told reporters on Sunday.

The Rohingya had admitted that they were residents of Yangon and Mandalay in Myanmar, the DIG said.

Our target is $5 billion of defence export in next five years: Modi

India is eyeing defence export of $5 billion in the next five years, Prime Minister Narendra Modi said on Wednesday, highlighting the measures taken by his government to boost manufacturing and woo investors to set up a base in the country. Inaugurating the 11th edition of DefExpo here, Mr. Modi said a country of the […]

Actor and BJP candidate from Thrissur Lok Sabha constituency Suresh Gopi appeared to have found himself in a spot on Sunday. District Collector, Thrissur, T.V. Anupama, has submitted a report to the Chief Electoral Officer (CEO), Kerala, Teeka Ram Meena, that she has found Mr. Gopi prima facie guilty of having violated the model of […]

Minimum income guarantee scheme will be rolled out in phases, says P. Chidambaram

The Congress party’s minimum income guarantee scheme will be rolled out in phases, senior leader P. Chidambaram said on Wednesday. The five crore beneficiary families will be covered in phases, he added. Addressing a press conference here, the former Finance Minister said enough economists and experts in the subject have been consulted and they broadly […]