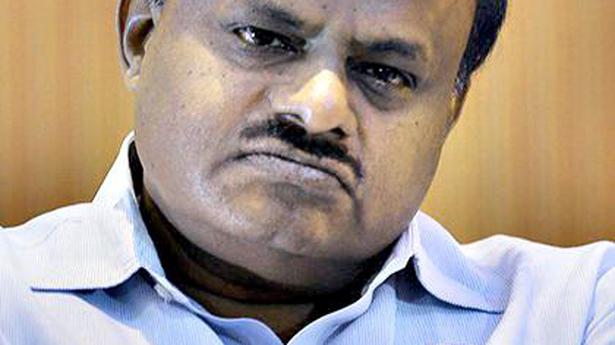 Former Chief Minister H.D. Kumaraswamy has said that he was waiting for the Income Tax officials to raid his place so that they could access documents related to Chief Minister B.S. Yediyurappa.

Speaking to presspersons here on Tuesday, Mr. Kumaraswamy said he had kept documents related to Mr. Yediyurappa’s properties worth crores of rupees. “I am waiting for the I-T officials to raid my place,” he said.

Making it clear that he was not opposed to I-T raids, the former CM said the Central government was making use of the I-T Department to act against its political rivals. “They are targeting only those in the Opposition, as if all BJP leaders are beggars with no money,” he commented.

Mr. Kumaraswamy said the Prime Minister’s Office had designated IAS officers to keep an eye on the State government. They are tracking every step of the government.

“Besides, the Rashtriya Swayamsevak Sangh headquarters get the minute-by-minute update on the Chief Minister’s movements,” he said.

The government required time to settle down and his party chose to keep mum on its failures about relief works in flood-hit areas. “Now we have seen how this government is functioning. We are working out strategies to convey their failures to the public”, he said.

“The government had no shortage of funds. There was no point in blaming the Centre for not providing the funds. The NDRF fund would never fulfil the need. But the State government did not commit to providing relief. They are interested only in looting money. They have not yet allotted houses constructed during our rule in Kodagu district,” he said. “The government released funds for constituencies going for to polls. The party in power is making money for the elections by assigning the works to Nirmiti Kendras,” he said.

Girl hurt in attack by rowdy-sheeter

A 16-year-old girl suffered a knife injury on her hand after a rowdy-sheeter allegedly attacked her with a knife for spurning his advances in Kothagudem on Friday evening. The shocking incident came to light on Monday after the mother of the girl approached the police seeking action against the rowdy-sheeter. According to sources, the accused […]

Karnataka should brace itself for 1 lakh cases: Deputy Chief Minister

Karnataka could have to brace itself for about one lakh cases of COVID-19 in the days to come, said Deputy Chief Minister and Minister for IT and Biotechnology C.N. Ashwath Narayan on Tuesday. “We are expecting requirement of about 20,000 beds and a need for 2,000 ventilators to tide over the crisis,” he said, and […]

YSR Congress Party corporator, representing the 3rd division of city, Boppana Bhava Kumar was nominated by the party to contest the elections from Vijayawada East constituency. Former MLA Yalamanchili Ravi, who joined YSRCP last year, has been expecting the East constituency ticket. Mr. Bhava Kumar, who is the party in-charge of the constituency, was also […]