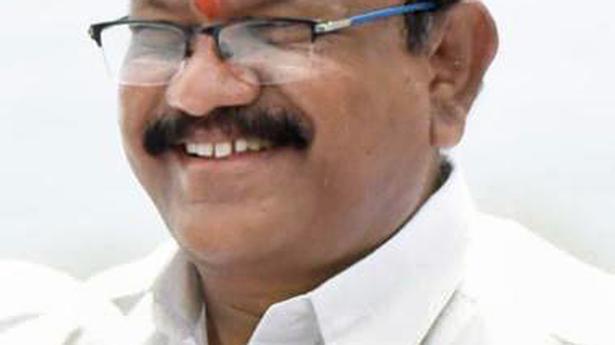 BJP candidate from Kalaburagi Lok Sabha Constituency Umesh Jadhav has said that if people decide, even a strong man can be defeated in an election.

He was reacting to Congress leader and MP M. Mallikarjun Kharge’s remarks that he is a strong man and that nobody can defeat him.

Mr. Jadhav was talking to reporters in Yadgir on Saturday.

“I hope that Speaker Ramesh Kumar acts according to the law and accepts my resignation. But, unseen hands are preventing him to do so,” he said and added that the Congress leaders are creating unnecessary confusion in the matter, though the question of disqualification did not arise at all.

The atmosphere in the Congress is against prominent leaders. Thus, senior leader A.B. Maalakaraddi has quit that party and joined the BJP, he said and hoped that many more leaders from that party may join the BJP in the coming days.

To a question, he said that he would convince K.B. Shanappa and Baburao Chavan of the need to remain in the party.

The driver of the bus that touched an 11-KV live wire at Mendarajpur in Odisha’s Ganjam district on February 9, causing the death of 10 persons, was arrested on Tuesday. The accused, Gagan Bihari Nayak, had jumped out of the bus when he realised that the top of the vehicle had come in contact with […]

Bus-stand demolition comes to a halt

The demolition work of the old municipal bus-stand in the town has come to a standstill following a dispute between the contractor and headload workers. The dispute erupted on Monday morning over the workers’ demanding wages that the contractor did not agree to. Workers of the AITUC and the INTUC demanded that ₹500 be paid […]

Adani Enterprises on Monday said that it had not done anything wrong in the supply of coal amid reports that the CBI registered a case against the company for alleged contract irregularities. The firm was replying to the BSE in response to a clarification sought by the bourse on a media report which said that […]