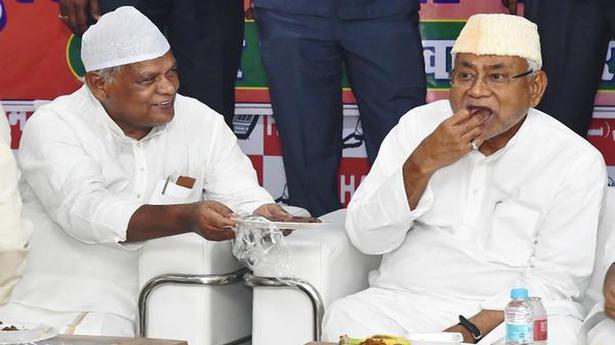 The meeting in the backdrop of the Rashtriya Janata Dal (RJD)’s offer to Mr. Kumar to join the mahagathbandhan, has fuelled speculation of new political equations in the State. Assembly elections are due in the State next year.

When asked whether that included Mr. Kumar, he said, “Everyone should come in.”

The RJD’s Iftar party on Sunday, hosted by party patriarch Lalu Prasad’s wife, Rabri Devi, was attended by leaders of alliance partners like Madan Mohan Jha of the Congress, Jitan Ram Manjhi and others. The carefully watched Iftar protocol also sparked off a war of words between political rivals.

Bihar Deputy CM Sushil Kumar Modi of the BJP said, “No political meaning should be attached to a leader’s presence or absence from at an Iftar party as it is a religious function”.

JD(U) spokesperson Ajay Alok said, “Why there is so much of talk when just one mahagathbandhan leader Jitan Ram Manjhi shook hands with the Chief Minister? A day will come when no one would be left in the mahagathbandhan.”

Responding to the jibe, State Congress leader Prem Chandra Mishra said, “What will happen even if Jitan Ram Manjhi goes to Nitish Kumar again?” Senior RJD leader Shivanand Tiwari said, “How can anyone restrict any leader to be an alliance partner…everyone is free to go anywhere.”

“I want to tell BJP they should be ready for its share of Dhoka 2.0 from Nitish Kumar as aisa koi saga nahi, jisko Nitish ne thaga nahi ( there is no friend whom whom Nitish Kumar has not betrayed)” Mr. Kushwaha told journalists on Sunday in Patna.

The Election Commission on Sunday said the decision not to announce the schedule for Assembly polls in Jammu and Kashmir had security reasons. Referring to the recent terror attacks and increased tension between India and Pakistan, Chief Election Commissioner Sunil Arora said the electoral body had been continuously assessing the ground situation in J&K, in […]

Mysuru gets train to Hyderabad

The demand for extending the Kacheguda-KSR Bengaluru Express to Mysuru was at last realised with the train (Number 12785) extended up to the city and its service was flagged off here on Tuesday. Mysuru MP Pratap Simha flagged off the train from the Mysuru Railway Station. Maritiebbe Gowda, MLC; Divisional Railway Manager Aparna Garg; and […]

The trio were among thousands of migrant workers who have set out on foot for their home states from Maharashtra in the last few weeks amid lockdown on account for coronavirus. Source: thehindu.com Related