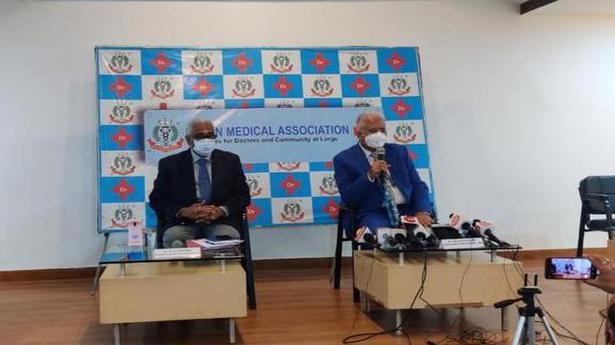 Stating that the recent notification by the government to allow surgical operations by Ayurveda practitioners and the formation of four committees by the NITI Aayog will only lead to “mixopathy”, the Indian Medical Association (IMA) has demanded an immediate withdrawal of both notifications.

In a release issued on Tuesday, the Association has called for withdrawal of non-essential and non-COVID services on December 11 6 a.m. to 6 p.m. in protest. Emergency services including casualty, labour rooms, emergency surgeries will function along with ICU’s, and CCU’s; but no elective surgical case will be posted.

“The recent policy tilt as evidenced in the medical pluralism advocated by the National Education Policy 2020 and the four committees of NITI Aayog for officially integrating the systems of medicine in medical education, practice, public health and administration as well as research ostensibly for a “One Nation One System” policy will ring the death knell of modern medicine system as a whole. In fact the purity and identity of Ayurveda stands equally challenged. That the council prescribed modern medicine text books and Ayurveda institutions practised surgery with the assistance of modern medical doctors cannot be reason enough to legitimise encroachment into the jurisdiction and competencies of modern medicine,” said Rajan Sharma, national president, IMA.

The Association added that adhering to COVID protocols, public demonstrations will be held in small groups of 20 participants between 12 noon to 2 p.m. on December 8.

“IMA demands withdrawal of the order and dissolution of the NITI Aayog committees for integration. IMA appeals to the Government to consider the sensitivity of the medical fraternity and take appropriate steps. IMA will be constrained to intensify the agitation until the steps towards implementing “mixopathy” are abandoned.

The IMA has appealed to all the sister professional speciality organisations, the organisations of medical college teachers, Government Doctors, Resident Doctors Associations apart from medical students and Hospitals Associations to support its cause to retain the separate identity and existence of modern medicine,” added R.V. Asokan, honorary Secretary General, IMA.

Narayanpet, one of the two youngest districts in Telangana which is going to complete one year of its formation on February 17, has received two Skoch Order of Merit awards for two programmes – Palle Pragathi and eOffice – at the 63rd Skoch summit held in New Delhi on Saturday. Kamareddy district received three National […]

Mostly dressed in blacks and wearing masks, several hundred people from all walks of life, including students, activists, doctors, corporate employees, auto-rickshaw drivers and security guards, assembled at Leisure Valley Park in Sector 29 here on Sunday morning to hold a massive demonstration seeking their right to clean air. The two-hour-long protest – seemingly one […]

Calling frequent elections in the country a matter of concern, Vice President M. Venkaiah Naidu on Thursday pitched for “simultaneous and broad” elections in the country. He was speaking at the ‘Punyabhushan’ award ceremony. He presented the prestigious award to noted archaeologist G.B. Deglurkar. “Since elections are around the corner and model code of conduct […]