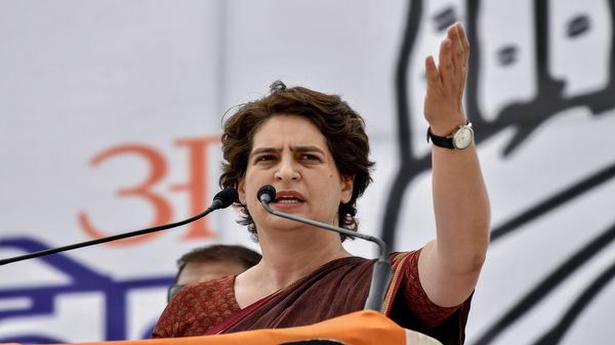 Dubbing the BJP’s Amethi candidate Smriti Irani as an “outsider”, Congress leader Priyanka Gandhi Vadra on Monday accused her of distributing shoes in order to insult Rahul Gandhi and said the people in the Congress president’s Lok Sabha constituency are not beggars.

Interacting with the voters in this key parliamentary constituency, Ms. Vadra, the Congress general secretary in-charge of eastern Uttar Pradesh, said the people of Amethi and Rae Bareli have self-respect and they do not beg from anyone.

“…if anyone has to beg, it is them (BJP), who will beg for your votes,” a visibly agitated Priyanka told the voters in the presence of reporters at a “nukkad sabha”.

“She (Irani) thinks she can insult Rahul Gandhi by doing this,” Ms. Vadra said, adding that the Union minister was in fact insulting the people of Amethi.

“The people of Amethi are very sensible. You all know who was going to open a food park in Amethi and the fact that it has not been opened till now. The food park would have benefitted five lakh farmers in Amethi and Rae Bareli,” she said.

Union Textiles Minister Irani had lost against Rahul Gandhi from Amethi in the 2014 Lok Sabha polls. Five years later, she is again hoping to breach the Gandhi family bastion.

Prime Minister Narendra Modi on April 10, 2020, remembered Jesus Christ on Good Friday, saying he devoted his life to serve others. Also read: Pope guides locked-down world through virtual Easter “Lord Christ devoted his life to serving others. His courage and righteousness stand out and so does his sense of justice,” Mr. Modi wrote […]

Review of lessons on Tipu only after report: Education Minister

A day after Chief Minister B.S. Yediyurappa dropped hints that lessons on 18th century Mysuru king Tipu Sultan would be dropped from the State syllabus textbooks, Minister for Primary and Secondary Education S. Suresh Kumar said a decision would be taken only after the textbook committee submits a report on the issue. Mr. Kumar told […]