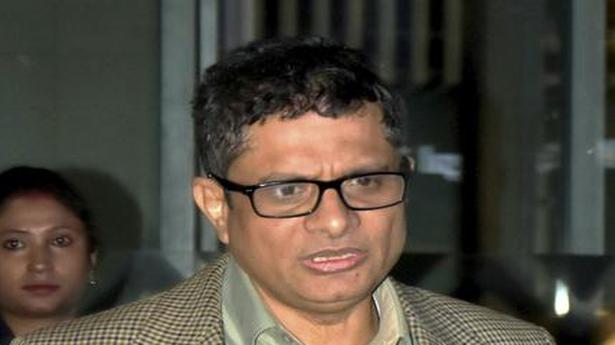 Former Kolkata Police Commissioner Rajeev Kumar’s anticipatory bail prayer in the Saradha chit fund scam case was heard ‘in-camera’ by the Calcutta High Court on Wednesday, on a plea by his counsel.

A Division Bench, comprising justices S. Munshi and S. Dasgupta, heard the submissions by Mr. Kumar’s lawyer in support of his pre-arrest bail prayer in the presence of only those advocates who are related to the case.

The matter will be heard again by the Bench on Thursday, a lawyer present during the proceedings said.

Mr. Kumar’s counsel had prayed for ‘in-camera’ proceedings in the case which the court agreed to.

His pre-arrest bail plea was on September 21 rejected by the Alipore district and sessions court.

The central agency has given multiple notices to Mr. Kumar, who is currently the Additional Director General in the West Bengal Crime Investigation Department, to appear before it for questioning as a witness in the multi-crore scam.

He, however, did not appear before the Central Bureau of Investigation and has sought more time on every occasion.

The Saradha group of companies allegedly duped lakhs of people to the tune of ₹2,500 crore, promising higher rates of return on their investments.

Five more cases of COVID-19 were reported in the district on Monday. With these, the total number of active cases rose to 52. Those tested positive we Source: thehindu.com Related

Curfew imposed in some parts of Jabalpur in Madhya Pradesh after violence during Friday protests against the Citizenship Amendment Act was on Sunday relaxed for seven hours from 1p.m., police said. Curfew was imposed on Friday in four police station areas in Jabalpur after protesters pelted stones, clashed with police and indulged in destruction of […]

Legislators belonging to Opposition parties including the DMK, the Congress and the IUML launched a boycott of the Assembly session on Monday, in protest against the government’s decision to continue the proceedings despite the COVID-19 outbreak. DMK president M.K. Stalin justified the boycott, saying legislators had to be with the people of their respective constituencies, […]