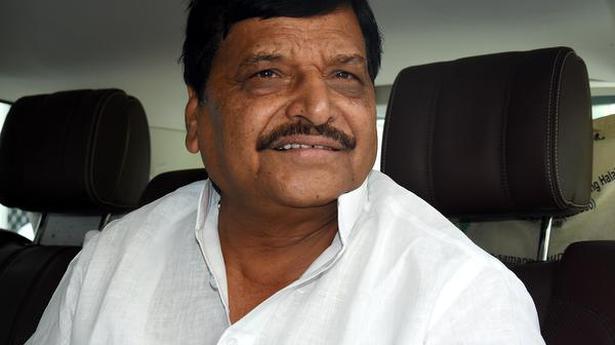 Don’t waste your votes on candidates of outfits propped up “behind the curtains” and campaigning in the name of caste, religion and kin, BSP chief Mayawati cautioned voters in Firozabad on Saturday.

Addressing a rally of the SP-BSP alliance, she did not name anyone but her target was obvious: Shivpal Yadav, the estranged uncle of SP chief Akhilesh Yadav. It’s not quite the “uncle vs nephew” contest that observers had hoped for, but Firozabad is the ground for a fresh bout between the members of Mulayam Singh Yadav’s clan. His brother Shivpal, who quit the SP to start his own party — Pragatisheel Samajwadi Party (Lohia) — after a long feud with his cousin Ramgopal and nephew Akhilesh, is contesting against Mr. Ramgopal’s son Akshay.

The Yadavs are the focus of this constituency, known for its glass and bangle industries. And the bitterness between the two sides has been a major feature of the campaign. Mr. Akshay Yadav, the SP’s sitting MP, has accused Mr. Shivpal of being the BJP’s “B-Team”.

In Saturday’s rally, he suggested that his uncle was being funded by the BJP, wondering how a new party could afford helicopter rides for canvassing.

By linking Mr. Shivpal Yadav to the BJP, the SP is trying to limit his influence, especially among its core Yadav and Muslim voters, who are a large part of the electorate in this seat.

Mr. Shivpal Yadav received a boost after the lone SP MLA from the Assembly segments comprising Firozabad, Hariom Yadav (from Sirsaganj seat), and the expelled former SP MLA from Firozabad city, Azim Khan, decided to back him.

Mr. Khan is a Pathan, and Mr. Shivpal Yadav hopes to cash in on the perceived conflict between the Pathans and the Siddiquis. That Jaswantnagar, Mr. Shivpal’s Assembly seat in Mainpuri, is also close by has also helped him cause a stir among his community.

Across the constituency, however, the support for Mr. Shivpal Yadav among the Yadavs is scattered. One of his strongholds is Nagla Himau in Madanpura block, home to his in-laws. The area is dotted with PSP (L) stickers: red, yellow and green with a “key” symbol.

Here, Mr. Shivpal Yadav is praised for being the troubleshooter and the accessible “chacha (elder uncle).” The electric poles, water tanks, school and hospital are attributed to him. “He stands for us,” said Dharmvir Yadav, a resident. “Even when he was not a Minister, he listened to our concerns. The electric poles had got damaged in the storm but he repaired them…just three months back,” he added. One can hear locals accuse Mr. Akshay of being an absentee MP. Many complained of the “rude” nature of his father, Mr. Ramgopal.

In his meetings, too, Shivpal has been playing the victim card and dubbed Ramgopal, who he mockingly refers to as “chasma” (spectacles) and “Shakuni” as the villain in the family feud that eventually culminated in Shivpal quitting the party he formed with his brother.

“I haven’t betrayed anyone, have only been betrayed,” Shivpal told a gathering of mostly Muslims in Shikohabad on Saturday. In another rally, he asked the people if “chasma” should be paid back for tacitly trying to defeat him in the Assembly election 2017 and for his friendship with BJP leaders.

The buzz in Firozabad is that the BJP, which provided Shivpal with a new bungalow in Lucknow, is trying to ensure his win by fielding a weak candidate.

Mr. Jadon’s only tryst with elections was in 1996 when he lost from the Ghiror seat in Mainpuri and he was picked in 2019 at the last minute, overlooking strong candidates like Jaiveer Singh, also a Thakur like him.

However, BJP workers say the idea is to sneak through in the battle of the Yadavs, who are virtually fighting for the same votes.

A BJP volunteer in Tundla, an Assembly segment of Firozabad, among the four out of the five segments won by the BJP in 2017, rubbished the view that the party was helping Shivpal. If that was the case, why would the party president, CM and the State president come here to campaign, he asked.

BJP’s traditional voters are also not buying that theory; they feel the BJP has a chance.

In Sirsaganj, Ram Das, who belongs to the Baghel community (OBC), and is a retired lecturer, praises Prime Minister Narendra Modi for building toilets and providing power supply but mainly the Balakot air strike. He doesn’t want to waste his vote on either of the Yadavs. “The country is shining under Modi. The rest have ganged up against him,” said Mr. Das.

The Thakurs, too, appear behind the BJP. Hakim Singh, a retired doctor in Nagla Himau village, also praises Mr. Modi for the various welfare schemes and says his community’s vote won’t go to either Shivpal or Akshay as the BJP candidate is a good man and could win with the Modi factor.

Bolstered by the support of the BSP, which brings a strong base of Jatavs, the SP will still rely on its core Yadav voters who are being aggressively wooed by Shivpal. One of them is Suresh Chandra Yadav, who runs a dairy farm of 60-65 buffaloes in the Nagla Ramlal village.

Mr. Yadav says the BJP government has neglected those who benefited under the Akhilesh Yadav government through the Kamadhenu dairy scheme. Profits have fallen as the costs of fodder have increased and even the subsidies are difficult to avail. The cycle symbol matters most for Mr. Yadav, who views Shivpal Yadav’s new party with suspicion.

“All the good work he did was as an SP worker… How did he form this new party,” asked Mr. Yadav, standing next to a buffalo shed.

The local Yadavs also praised Akhilesh Yadav for helping their business — they can now travel to Delhi to sell their milk — by developing the Lucknow-Agra Expressway.

Shivpal has tried to woo the Muslims too by including their security concerns in his party’s manifesto, hobnobbing with some well-known clerics and promising to keep afloat the bangle industry that mainly employs the minority comminity’s members.

While the influence of Azim Khan and his own rapport are expected to help him to cut into the Muslim votes, drawn against the might of the SP-BSP alliance, Shivpal could find the going tough, especially amid the allegations of his proximity to the BJP.

As Nadeem Khan, a contractor in Makhanpur, put it: “People have understood his game,” he said.

The SP has had mixed fortunes in the seat.

At least 106 passenger trains were either cancelled or short-terminated by Northeast Frontier Railway (NFR) in view of the protests against the Citizenship (Amendment) Act since Wednesday, the NFR said in a statement said on Friday. The NFR has cancelled up and down Guwahati-Dimapur BG Express, Sealdah-Agartala Kanchanjungha Express and the Howrah-Dibrugarh Kamrup Express that […]

The Supreme Court on Tuesday allowed 30 staffers of LG Polymers emergency access to the company’s Vishakapatnam factory from where a styrene gas leak Source: thehindu.com Related