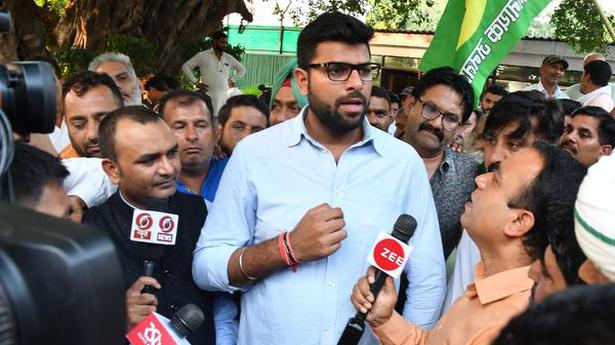 The ruling BJP’s coalition partner in the Haryana government, the Jannayak Janta Party (JJP), on Monday said the party stood firmly with the farmers and was hopeful of a positive outcome from the sixth round of meeting between the agitating farmers’ unions and the Central government on December 9.

Senior party leader Digvijay Chautala said all 10 legislators of the JJP and the whole party stood in solidarity with the peasantry fighting against the new farm laws.

“All 90 MLAs, khaps, 36 biradari (communities) and all Sarv Samaj in Haryana, besides the Union government, are with the farmers and all are praying for the speedy solution of all issues,” he told journalists here.

“For the JJP, farmers and khaps are most important. The decisions of khaps are higher than anything else,” he added.

Mr. Digvijay said the Union government was listening to the issues raised by the farmers patiently and it had also promised amendment in the laws as per their demands.

He said senior leaders of the JJP along with Deputy Chief Minister Dushyant Chautala had been constantly in touch with the Central Ministers.

He said there was no need for MLAs to give resignation as all legislators are supporting the farmers. “Resignation is not a solution to the issues raised by the farmers and it will just invite fresh elections resulting in a waste of public money,” he said.

On the Bharat Bandh call on December 8, he said the farmers had the right to be heard and the administration must make arrangements to ensure farmers did not face any kind of problem.

Vizianagaram District Congress Party geared for ensuing municipal and zilla parishad elections by beginning identification of right candidates, according to DCC president Yedla Adiraju. He said that the the party would get back its glory within no time with the joining of many youngsters. “People have been fed up with BJP at national level. They […]

Congress Legislature Party (CLP) leader, Bhatti Vikramarka has termed this year’s budget as jugglery of figures to mislead people, and asked the government as to how it can project 29% growth over last year financial year when it had scaled down the same by 24% this year citing economic crisis. “How can minus 24% budget […]

Mr. Mukherjee, he is under intensive care. Source: thehindu.com Related