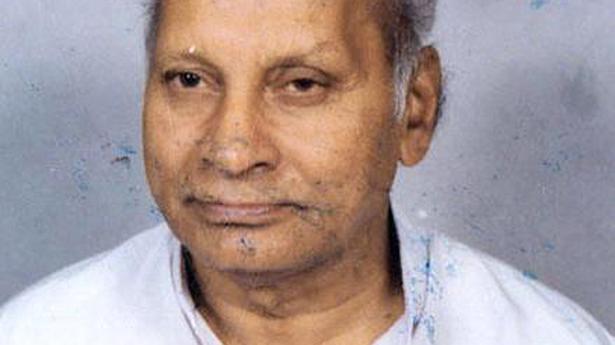 Girdhari Lal Bhargava, a former BJP stalwart who was elected six consecutive times from Rajasthan’s Jaipur constituency, had coined a phrase in the 1990s to prove his commitment to his constituency and its people: Jiska koi na puchey haal, uskey sang Girdhari Lal (If you have no one to bank upon, I am with you). The locution impressed his supporters so much that they would raise it ad nauseam in every Lok Sabha election till his death in 2009.

Bhargava set standards which the candidates of every political party has found difficult to match in the past one decade. Yet, sitting BJP MP Ramcharan Bohra won the 2014 Lok Sabha election by a margin of over 5.30 lakh votes, which was the largest ever in Rajasthan, by defeating Mahesh Joshi of the Congress.

Mr. Bohra, 63, is in the fray again this time, trying to take advantage of his clean image. A businessman and agriculturist, he has been active in Parliament, taking part in the debates. He participated in 110 debates and asked 312 questions in the Lok Sabha sessions.

With Jaipur being the State capital, an elected representative has to deal with multiple urban agencies to bring relief to the common people on various fronts.

Despite his criticism by several quarters, Mr. Bohra says he has tried to reduce congestion in the city and improve water and power supply. “The local bodies need to help out the State government… I am probably the first MP who has spent ₹3 crore from MPLAD for creating a robust infrastructure for cleanliness.”

The Congress has fielded a woman candidate, former Jaipur Mayor Jyoti Khandelwal, while taking a “calculated risk” in the constituency dominated by Brahmins and Vaishyas.

A woman candidate is contesting in Jaipur after 48 years, as it was Gayatri Devi of the erstwhile royal family who had won for the third time here in 1971 as a Swatantra Party candidate.

Ms. Khandelwal, who has been a Congress office-bearer in various capacities since 2004, has promised to formulate an action plan for rejuvenating all traditional water resources, including the Ramgarh dam on the outskirts of Jaipur which has completely dried up. Improving the capital city’s rail and air connectivity is another area of her emphasis.

All India Milli Council’s Rajasthan secretary Abdul Qayoom Akhtar, who resides in the Walled City here, said the elected MP should not only work for infrastructure development, but also for equitable distribution of resources among all sections of society. “The living conditions in some parts of the city are pathetic. The new MP should take an initiative for its betterment,” he said.

As the 21.27 lakh voters in the urban area look forward to casting their ballot on May 6, two Olympians are facing each other in the Jaipur Rural constituency in one of the State’s most keenly watched electoral battles. The Jaipur Rural seat came into existence in 2008 following delimitation of parliamentary constituencies.

Our target is $5 billion of defence export in next five years: Modi

India is eyeing defence export of $5 billion in the next five years, Prime Minister Narendra Modi said on Wednesday, highlighting the measures taken by his government to boost manufacturing and woo investors to set up a base in the country. Inaugurating the 11th edition of DefExpo here, Mr. Modi said a country of the […]

The Tripura government has designated several courts as first-track courts to try pending proceedings under the Protection of Children from Sexual Offences (POCSO) Act. A special court has been set up here and nine more across districts have been designated for the purpose, a law department official said. Five such courts have been set up […]

Search for Puthumala landslip victims to be wound up

A meeting of people representatives, officials of various departments, and kin of those who had gone missing in the Puthumala landslip on Friday decided to wind up the search operations for the missing persons. Six families were satisfied with the efforts taken by the district administration so far and agreed to conclude further search, Wanayad […]