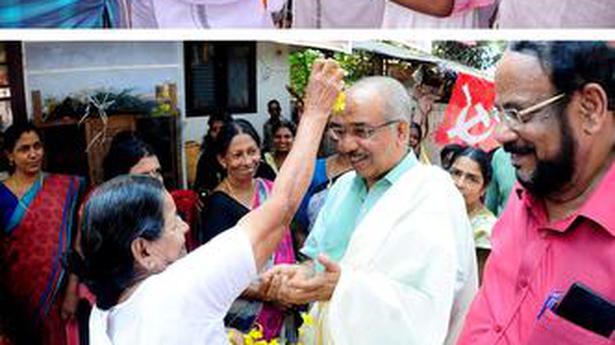 Midway into his campaign for the Lok Sabha election, two-time Congress MP M.K. Raghavan, who is running for the Kozhikode seat, was not expecting the unexpected – a sting operation that threatened to stymie his political career.

Last week, a newly launched Hindi news channel telecast some purported visuals in which Mr. Raghavan is seen seeking kickbacks for a proposed land deal and highlighting the enormity of his poll expenditure. The controversy unfolded even as Congress chief Rahul Gandhi was getting a rock star welcome at his Wayanad roadshow.

The controversy led to accusations and counter-accusations between the UDF and the LDF. At a press conference called to deny the allegation, Mr. Raghavan even broke down.

Now a police investigation is on into the episode. But the dust has not settled, though Mr. Raghavan tries to look unfazed. “People know it is fake, I will face the issue boldly,” Mr. Raghavan told The Hindu. Significantly, it is the IUML, the second largest party in the UDF, that is putting up the maximum effort to secure a third term for Mr. Raghavan.

His nearest rival, A. Pradeep Kumar, a three-time MLA now representing Kozhikode North, is equally popular in the city. His campaign managers are focussing on the rural folk. While CPI(M) leaders have been training their guns on Mr. Raghavan over the controversy and have even filed a defamation suit against him, Mr. Pradeep Kumar is keeping mum on the sting operation. “I do not want to comment on the matter. Let the issue take its own course,” he told The Hindu.

However, development is no more the poll plank for the Left camp. “Now our priority is to throw the BJP out of power and install a secular government with the support of the Left parties. Only the Left can offer a credible political alternative to the BJP. Development is secondary and it will come obviously,” he asserts.

The NDA is beset with its own problems and its candidate K.P. Prakash Babu, who had been in judicial custody since March 27 in connection with a Sabarimala protest case, came out on bail only on Thursday.

The remand has apparently affected his electioneering though the party cadre is struggling to project the development initiatives of the Narendra Modi government. Now that he is out of jail, his presence in the constituency is expected to give a fillip to the sagging BJP campaign. In the 2014 Lok Sabha polls, the NDA had received 1.15 lakh votes. But it secured nearly 1.7 lakh votes from the seven Assembly segments in the Kozhikode constituency.

The South Western Railway (SWR) has fixed timing for refund of tickets that were cancelled after imposition of lockdown. In press release, the SWR sai Source: thehindu.com Related

The Koregaon Bhima Inquiry Commission has decided to summon NCP chief Sharad Pawar for deposition in the case of caste violence near here in 2018. The commission’s chairman, retired Justice J.N. Patel, noted that Mr. Pawar has filed an affidavit before the panel and he would be summoned to depose, the judicial panel’s lawyer Ashish […]