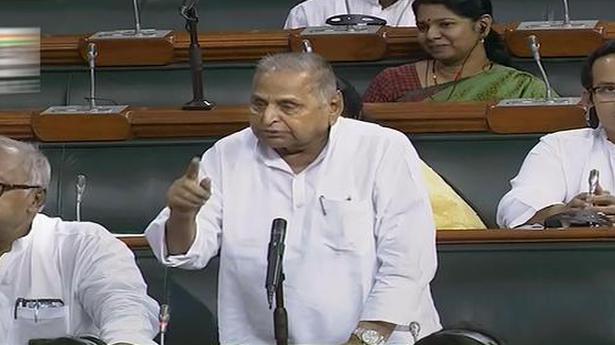 Samajwadi Party leader Mulayam Singh Yadav on Tuesday sought to know from the government when former Jammu and Kashmir Chief Minister and sitting MP Farooq Abdullah would be released from custody.

Mr. Yadav raised the issue of Mr. Abdullah’s detention by the Jammu and Kashmir administration in Lok Sabha during the Question Hour.

“Our colleague Farooq Abdullah used to sit with me. When will he come to the House,” he asked.

However, Speaker Om Birla did not ask the government to reply to the SP patriarch’s question and moved on to the next item of the agenda.

Mr. Abdullah was the first to be put under house arrest on August 5, 2019 following the abrogation of the Article 370 and bifurcation of the erstwhile state of Jammu and Kashmir into two Union Territories.

In September, the 82-year-old leader was slapped with the stringent Public Safety Act (PSA) and he continues to be under house arrest.

Both Mr. Omar and Ms. Mehbooba were slapped with the PSA last week.

The Janata Dal (United) has proposed ‘a farmer driving a tractor’ as its new election symbol in Jharkhand, after the Election Commission barred the Nitish Kumar-led party from using the ‘arrow’ symbol. The poll panel had issued the order last month in response to an application filed by the Jharkhand Mukti Morcha (JMM) which pointed […]

The Legislative Committee on the Welfare of Backward Communities has said that all Government departments should take immediate steps to report vacancies to the Kerala Public Service Commission (PSC). The Committee issued the directive while holding a sitting at the Kannur Collectorate on Thursday. If the existing vacancies were not reported in a timely manner, […]

The award was given to the PSU for transforming Neyveli township into a plastic-free, clean and green campus Source: thehindu.com Related