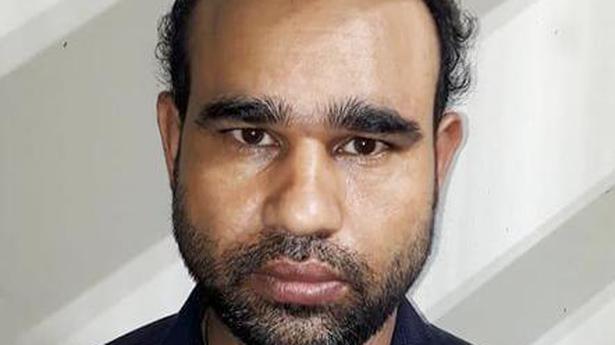 In an ongoing operation, the Delhi police have arrested a drug kingpin and seized 260 jute bags containing 130 kg of soaked and dried Afghan heroin from a container in Navi Mumbai.

Manishi Chandra, DCP (Special Cell), said on Friday that an autorickshaw driver-turned-druglord Tifal Nau Khez and his Afghan associate Ahmad Shah Alokozai were held and on their disclosure a raid was conducted.

“A police team conducted a thorough search at Customs Bonded area in Panvel. A container which was imported by the accused through their contacts in Mumbai from the Bandar Abbas port of Iran had about 260 jute bags with basil seeds,” said Mr. Chandra.

The jutebags were found to contain another jutebag covered with a thin white polythene layering. Inside the inner jute bag was soaked and dried Afghan heroin. Each had approximately 500 grams of pure heroin.

Mr. Chandra said Khez was a school dropout and was born in a very poor family in Bulandshahr. After doing odd jobs for several years, he moved to Delhi and started driving an autorickshaw. He was first arrested in Punjab in 2013 with 250 grams of heroin. During his stay in Amritsar jail, he made many contacts with drug smugglers.

After coming out of jail, he got in touch with Afghans residing in Lajpat Nagar in Delhi and came in contact with an Afghan drug smuggler identified as Sheikh.

“Khez managed to sell heroin through his contacts in Amritsar jail. While dealing, he made contacts with many Afghan nationals, including drug kingpin Haji based in Afghanistan,” said Mr. Chandra.

To avoid detection at customs and checkposts, Haji asked Khez to set up a heroin ‘reconstitution’ factory in Delhi. A flat was purchased in Zakir Nagar for the purpose.

A police officer said the drug consignment seized in Mumbai originated from Herat, Afghanistan, and came by sea to Mumbai via Bandar Abbas, Iran.

He added that it was a rare seizure of landlocked Afghanistan’s heroin taking the sea route to India.

The total recovery in the ongoing operation now exceed 330 kg, with a street value of about ₹1,320 crore.

The other accused is Ahmad Shah Alokozai, from Afghanistan. He was living in Delhi for the past few years under the cover of a wholesale dry fruits dealer. He was tasked by Haji to set up a company through his Indian contacts for import of dry fruits to India.

After getting into drug smuggling, Khez amassed enough wealth in just 4-5 years that he was planning to settle in Turkey as it has easy access to European contraband markets. “He was planning to meet Haji in Dubai in the coming month… he had obtained a tourist VISA,” said a police officer.

Khez was also a dealer in the chemical, Dextromethorphan, which is a restricted compound used as an adulterant to puff the quantity of Heroin for street use.

The accused has five daughters from two wives apart from other love interests. Two of his brothers are already settled in Dubai and they were ready to facilitate Khez’s emigration to Turkey, said the police. Khez was very fond of fast cars and a fan of Hollywood movies, the officer added.

Ten more deaths due to COVID-19 infections and 84 new cases were reported from West Bengal in the past 24 hours. The total number of people who have d Source: thehindu.com Related

Vizagites, especially those connected to cricket, are in a jubilant mood, as city lad Kone Srikar Bharat has been selected by the BCCI for the Indian test team. The 26-year-old cricketer has been asked to join the team in the midst of the historic pink ball test match, being played between India and Bangladesh. “We […]