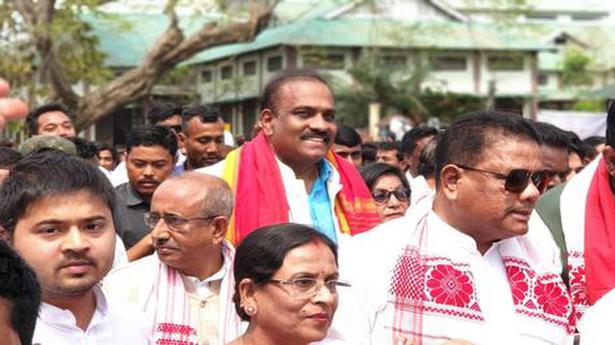 Tezpur means ‘city of blood’, an allusion to the mythological war between the ‘outsider’ Hari, or Lord Krishna, and the ‘local’ Hara, or Lord Shiva.

Aeons down the line, a bloodless but verbally-loaded battle is being fought for the Tezpur Lok Sabha constituency between retired IAS officer of Assam-Meghalaya cadre M.G.V.K. Bhanu of the Congress and Assam Minister Pallab Lochan Das of the BJP.

The BJP considers Mr. Bhanu, from Andhra Pradesh, an outsider while for the Congress, Mr. Das — a member of the “tea tribes” community – is a story of migration to Assam from elsewhere in India since the 1800s. And the barbs invariably involve the name of the former.

BJP leaders have mocked Mr. Bhanu for his long name that “even the Congress cannot pronounce or remember”. He has also been termed a ‘saalani maas’ (imported fish) and likened to cattle past the age of ploughing the field.

“Name does not matter, work does. And my work for Tezpur as a district magistrate years ago speaks for itself. I have been hurt by the words they are being used to describe me, but I forgive them,” Mr. Bhanu said.

M.G.V.K. expands to Maddukuri Gopala Venkata Kumar. But the Congress has turned the BJP’s mockery to give local meaning to the initials. One of them is Manabkhebi (humanitarian) Gooni (talented) Varakhajogya (trustworthy) Kartabyaparayan (responsible).

He is the first from southern India to contest any election in the Northeast. Before him, Alka Desai Sharma from Gujarat had won an Assembly election in Assam on Asom Gana Parishad ticket while a few from northern India, including former Prime Minister Manmohan Singh, have represented the State in the Rajya Sabha.

“Tezpur’s has been a case of representation by migrant communities for a long time. It is unfair to call Mr. Bhanu, who has made Assam his home and is building a house in Tezpur, an outsider,” Congress spokesperson Rhituparna Konwar said.

Gorkhas are a major voting community in Tezpur. The constituency has had three Gorkha MPs for five terms, beginning with Swarup Upadhyay, son of the first Assam Congress president Chhabilal Upadhyay, in 1991. The seat is currently represented by BJP’s Ram Prasad Sarmah, a Gorkha.

Many Gorkhas have resented the BJP’s decision to drop Mr. Sarmah and field Mr. Das, whose “tea tribes” community constitutes about 45% of the voters due to scores of tea estates, including Monabarie which is considered the largest on earth. The last tea community MP from Tezpur was Joseph Toppo of Asom Gana Parishad from 1999-2014.

Civil society leaders in Tezpur say the place earned the ‘cultural capital of Assam’ tag primarily because it was the karmabhoomi (place of work) of Assamese cultural icon Jyotiprasad Agarwala, whose ancestors settled in Assam from Marwar region of Rajasthan in the early 1800s.

“Even Krishna, in that sense, was an outsider. Legend has it that he came to Tezpur with his forces to release grandson Aniruddha, who was imprisoned in Agnigarh, or fort of fire, by King Banasura for falling in love with his daughter Usha. Banasura sought his deity Shiva’s help that led to the Hari-Hara war,” veteran journalist S.G. Kashyap said.

Krishna became a local deity in Assam after 15th century saint-reformer Srimanta Sankardeva propagated Vaishnavism. Krishna has since been sharing space with Shiva.

Eight contestants apart from Mr. Bhanu and Mr. Das are vying for the Tezpur seat.

Several policemen, including an Assistant Commissioner of Police (ACP), were injured in stone throwing at a protest march against the Citizenship Amendment Act (CAA) and the National Register of Citizens (NRC) in the Shah-E-Alam area of Ahmedabad on Thursday. Police had lobbed teargas shells to disperse a mob of around 2,500 people, when some started […]