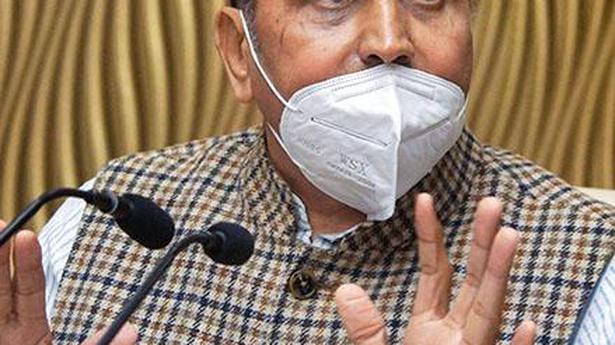 Haryana Agriculture Minister Jai Prakash Dalal on Sunday said the State farmers agitating against the three farm laws in Delhi should also seek resolution of the Satluj-Yamuna Link Canal issue with Punjab in their ongoing talks with the Centre.

Addressing a press conference here, Mr. Dalal urged all people and organisations in the State supporting the farmers’ agitation, directly or indirectly, to raise their demand for SYL construction as water for irrigation was a major issue of the farmers in Haryana besides other issues.

Mr. Dalal said the situation on the underground water front in half-a-dozen districts of South Haryana was grim and the groundwater table had depleted 400-800 feet.

“In many areas there is no water and underground water resources have dried up. In my own Assembly constituency Loharu, some villages are left with no drinking water, what to talk of water for irrigation. When there will be no water, how will the crops come up. If there is no crop, then the issue of rate will have no meaning,” said Mr. Dalal.

“We have won the case in the Supreme Court and now the SYL canal, the construction of which is pending for the last 40 years and which is considered the lifeline of Haryana, should be completed. Therefore I request people across party lines, who are participating in the farmers’ agitation and all those who are supporting it, directly or indirectly, to include construction of SYL canal in their demand letter for the welfare of farmers of Haryana, so that when farmer leaders and officials of the Government of India sit face-to-face for negotiations, this issue is also discussed,” the Minister said.

On the ongoing farmers agitation, Mr. Dalal said the issue was being politicised in the name of farmers but “we all are sons of farmers and will continue to take decisions in the interest of farmers as and when required”.

In reply to a question on why the State government was not taking up the SYL issue with the Centre, Mr. Dalal said he did not want to get into what had happened on the issue so far and make an appeal as an individual. He also parried a question on his recent statement alleging that many foreign powers, including China and Pakistan, wanted to create instability in the country in the name of farmers’ movement.

Prime Minister Narendra Modi was greeted by the sights, sounds and dresses of a “Mini India” as part of a grand welcome ceremony organised by the State unit of the JP here on Saturday evening. Party workers in the thousands, mobilised from across the Capital and showcasing the cultural heritage of their respective States, began […]

Dry weather may prevail in Tamil Nadu on Sunday, except for light to moderate rains in a few places of the State, according to Meteorological Department. A trough in easterlies that lie over the southeast Arabian Sea off Kerala coast at 0.9 km above the mean sea level influenced rainfall over the State. One or […]

Decisions have to come through Group of Ministers, Cabinet and pay commissions after wider consultations, says ex-officer Source: thehindu.com Related