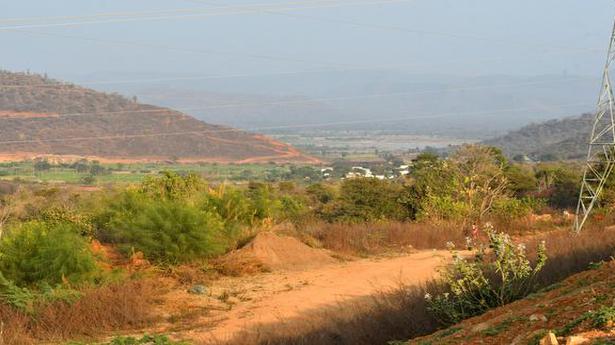 Indecision over the type of structure or bund to plug the gap between two hillocks as part of the construction of Anjanagiri reservoir, a key component of Palamuru-Rangareddy Lift Irrigation Scheme, is likely to delay the completion of the first storage point of the project.

Of the three reaches of bund construction to form the reservoir, work is nearing completion in two reaches — one and three — but it is yet to take-off in reach-two. According to the project engineers, of the 11.22 km length required to form the reservoir bund, construction of 6.5 km length bund is required to be formed in three reaches and the surrounding hillocks form the remaining 4.72 km of bund.

After the water is lifted from Srisailam reservoir, it first reaches Anjanagiri reservoir, being constructed between Anjangiri and Narlapur villages, for its onward journey. The reservoir is displacing (submergence) Anjanagiri, Sunnapu Thanda, Vadde Gudiselu and part of Borabada villages in Kollapur mandal. Project officials stated that implementation of relief and rehabilitation package has been completed for all affected villages, except a few individual farmers, as per GO 123.

After finding no trace of rock base even after drilling for over 30 metres in the gorge between the two hillocks which forms reach-two of the reservoir bund running for a length of 675m at the top and 220m at the bottom, the project engineers approached experts of Tehri Dam in Uttarakhand, which has the highest rock-fill dam (RFD) in the world at 264 m and can withstand earthquakes in the magnitude of even 10 on the Richter scale.

A team of Tehri experts led by Executive Director of Tehri Hydro Power Corporation Rajeev Vaishnoi visited the Anajanagiri site in February last and recommended construction of RFD there. According to official sources, it did not make further progress after the corporation asked for ₹50 lakh consultation for sharing the technology. The reach-two of Anjanagiri reservoir bund requires a height of 74 m.

During Chief Minister K. Chandrasekhar Rao’s visit to project works in August-end last year, when the engineers explained about borrowing RFD technology, the former was understood to have suggested altering the reservoir bund design. The alternative link avoiding the original reach-two location would, however, increase the project cost by ₹120 crore and at the same time would reduce the reservoir storage capacity by 2.2 tmc from the original 8.51 tmc ft.

When contacted, project officials stated that there was no clearance for either of the possible ways to complete the reach-two of the Anjanagiri reservoir bund.

Efforts on to create world-class auto ecosystem in State: Minister

Hoping that the Indian automobile industry will produce world-class and affordable electric vehicles by emerging from the shadows of trailblazers like Tesla, Minister for Industries and Commerce Mekapati Goutham Reddy has said efforts are under way to create the kind of ecosystem in the State that the private sector requires to make their impression in […]

We are watching movements in the Indian Ocean Region: Navy Chief

The Chinese Navy is expanding rapidly and there are increases forays in the Indian Ocean Region (IOR), said Navy Chief Admiral Karambir Singh on Wednesday. Similar concerns were shared by Navy officers from Australia, France, Japan and U.K. Presently, at any given time there are about 7-8 vessels and 85% of their defence exports are […]

The recent result of Maharashtra-Haryana elections is a blow to the arrogance of the Bharatiya Janata Party and its allies, Communist Party of India (CPI) general secretary D. Raja has said. Addressing a meet-the-press organised by the Thrissur Press Club on Saturday, Mr. Raja said that though the BJP won the States, it was not […]