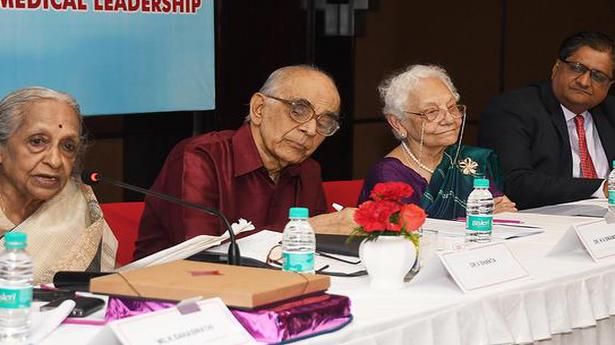 Despite being one of the fastest growing economies in the world, India ranks amongst the poorest achievers when it comes to good healthcare, said Sneh Bhargava, former director of AIIMS, New Delhi.

She added that Bangladesh, Nepal and Sri Lanka had overtaken the country in all healthcare parameters and accomplishments.

Delivering her keynote address at an event organised by the Madras Chamber of Commerce and Industry (MCCI) and Waterfalls Institute of Technology (WITT) in Chennai, she said that many more nurse training centres were required for skill-task alignment.

She also asked why a country that can build space launch vehicles and put Mangalyaan into space cannot manufacture CT scanners, image intensifiers and MRI machines.

According to her, even large manufacturing company today has a base in China, not India. On the positive side, there was a Harvard study which showed that patients treated by Indian doctors had lower death rates.

V. Shanta, chairperson, Cancer Institute (WIA), shared her six-decade journey with the institute. She recalled the years of struggle and various challenges that the institute faced.

“During the early years, we didn’t have enough money. Some even declared us as an uneconomic unit. Our first turning point came during the year 1957,” she said.

In 1957, the institute started a department of nuclear medical oncology and also acquired the first Cobalt 60 unit. She added that NGOs constituted a large segment in the healthcare delivery system in India and the cancer hospital should be given a separate category and not clubbed with all NGOs.

Ramkumar Ramamoorthy, president of MCCI, pointed out that many healthcare institutions had been members of the chamber for many decades, including the Voluntary Health Services.

He further said that healthcare had become one of India’s largest sectors both in terms of revenue and employment, catering to both the domestic and international needs.

This sector was growing owing to its strengthening coverage, services and increasing expenditure by public as well as private players. The size of the industry was estimated to touch $372 billion by 2022.

“While it’s good to look at revenue and employment numbers it’s equally important to put CARE back into healthcare, and ensure quality, accessibility, availability and affordability of healthcare,” he said.

Adani Enterprises on Monday said that it had not done anything wrong in the supply of coal amid reports that the CBI registered a case against the company for alleged contract irregularities. The firm was replying to the BSE in response to a clarification sought by the bourse on a media report which said that […]