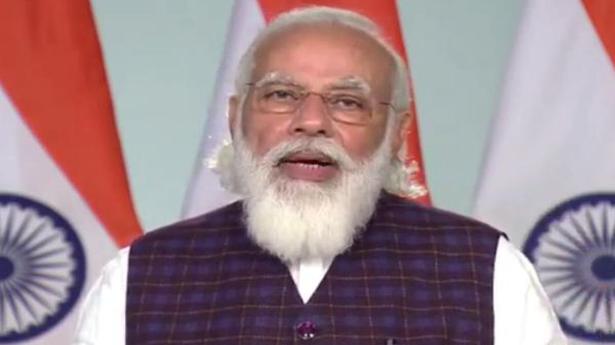 Mr. Modi said “This [IMC] is the gathering of brightest minds in the telecom sector.”

Prime Minister Narendra Modi on Tuesday told telecom industry leaders that all stakeholders need to work together to ensure timely roll-out of 5G technology as well as make India a global hub for telecom equipment, design, development and manufacturing.

“The future holds great potential with the rapid technology progress. We need to work together to ensure a timely rollout of 5G to leapfrog into the future and empower millions of Indians,” the Prime Minister said.

He added that India was also embarking on a plan to ensure that over the next three years every village would have high speed fibre-optic connectivity and that Andaman and Nicobar Islands had already been linked up with fibre optic cable.

Speaking at the inauguration of India Mobile Congress 2020, Mr. Modi also noted that due to technological upgradation, there was a culture of replacing handsets and gadgets frequently, and asked the industry to look at forming a task-force to think of better ways of handling the electronic waste.

“Even as we experience the rapid speed at which connectivity is improving, we also know that the acceleration has just begun…it is important to think and plan how do we improve lives with the upcoming technology revolution. Better healthcare, better education, better information and opportunities for our farmers, better market access for small businesses are some of the goals we can work towards,” the Prime Minister said.

He added “we are in the era where mobile apps that are a few years old are surpassing the value of companies that have been present for decades, which is a good sign for young innovators in India”.

He added that it was with the help of mobile technology that India would embark on one of the world’s largest COVID-19 vaccination drive.

Akhara Parishad, an apex body of saints and seers, on Friday said the schedule of 2021 Haridwar Kumbh cannot be deferred and it will have to be held Source: thehindu.com Related

T.N. police on the lookout for Iraqi nationals

The Tamil Nadu police are on the lookout for two suspects who escaped from an Iraqi detention centre in the first week of August. Following an alert from Interpol, the State intelligence has sounded an alert to all Commissioners/Superintendents of Police to step up vigil and look for the two who, along with 12 others, […]