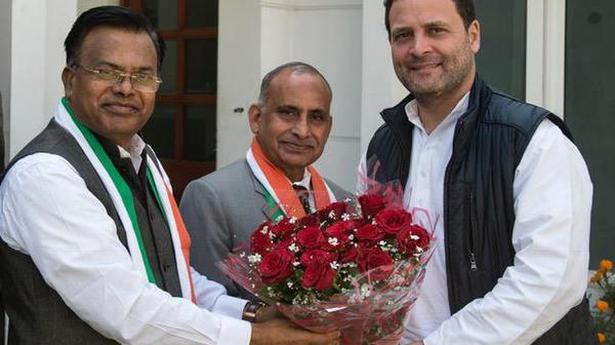 The upcoming polls could have been a cakewalk for the Congress in Ramtek, if not for the party’s familiar bugbear: infighting.

The party is infested with factionalism in this SC constituency in Vidarbha, adjoining Nagpur. It has shown up in everything from distributing tickets to campaigning, to the extent that party president Rahul Gandhi’s choice of candidate Nitin Raut could not get the official party documents for the nomination on time. Instead, Kishor Gajbhiye, who switched from the Bahujan Samaj Party, will take on the Shiv Sena’s sitting MP Krupal Tumane.

Ironically, Mr. Gajbhiye was pushed into the arena at the eleventh hour. The former Indian Administrative Service officer was originally hoping to get a ticket for the Assembly elections from Nagpur. He had to take the Lok Sabha poll plunge on orders from Congress general secretary Mukul Wasnik, leading to a major unrest in the party’s ranks. Mr. Wasnik won the seat in 2009 but lost to Mr. Tumane in 2014 by 1.75 lakh votes.

A Congress MLA said, on condition of anonymity, that had Mr. Raut been given the seat, the party would have had it easy in Ramtek. “The Shiv Sena MP has done nothing. He is unpopular, and the Bharatiya Janata Party (BJP) is busy saving Nitin Gadkari in Nagpur. All the BJP MLAs from Ramtek are camping in Nagpur, leaving the Sena candidate largely on his own.”

Kamlesh Wankhede, a senior journalist from Marathi newspaper Lokmat had something similar to say. “Social equations have changed in the constituency. The Kunbis are aligning with the Congress this time and may vote for the party’s Buddhist candidate. Historically, the Kunbis have been known to vote for Hindu scheduled caste candidates, such as Mr. Tumane of the Shiv Sena,” he said.

Despite the infighting, Mr. Gajbhiye has his strong points. “I have been the district collector. I know how the system works. Who else can solve your problems?” he asked.

Of the six Assembly segments in Ramtek, Savner was won by the Congress in 2014. Katol’s BJP MLA Ashish Deshmukh resigned from the post and party last year to join the Congress. As in Nagpur, second-rank Congress leaders and assembly ticket aspirants are leading the campaign for him.

Mr. Tumane on the other hand, is known for being quite the ‘silent Parliamentarian’; having asked only one question in his five-year tenure in the Lok Sabha.“His only question was about increasing MPs’ salaries. Do you want an MP who wishes to increase his own salary?” Mr. Gajbhiye asked at the public meeting.

Given the size and spread of the seat, Mr. Tumane’s campaign is focused mostly on road shows. “I have to meet all my voters before poll day. The Opposition can say anything about me, but my people know that I have been here for them whenever they needed me. I am sure I will win,” he says.

Among the other candidates, Kiran Premkumar Rodge, who contested as the BSP candidate in 2014 and won over 95,000 votes, is now the Prakash Ambedkar-led VBA candidate.

Maharashtra, Delhi and Gujarat have emerged as the States most-affected by COVID-19, together accounting for around 49.5% of India’s cases. According to the Union Health Ministry, India has managed to maintain a linear growth of COVID-19 cases over the one month period during its lockdown. The Hindu has brought out a multi-language e-book on essential […]

The Madras High Court on Wednesday held that a recommendation made by the State Cabinet to the Governor on September 9, 2018, for releasing all seven life convicts involved in the former Prime Minister Rajiv Gandhi assassination case would come into effect only after the Governor affixes his signature and not otherwise. Justices R. Subbiah […]

October is the month of high floods in the Krishna River. Floods in the river coincide with the Southwest monsoon — from middle of June till the end of September and the Northeast monsoon — from October to November. The highest flood level discharge ever recorded at Prakasam Barrage was on October 5, 2009, when […]