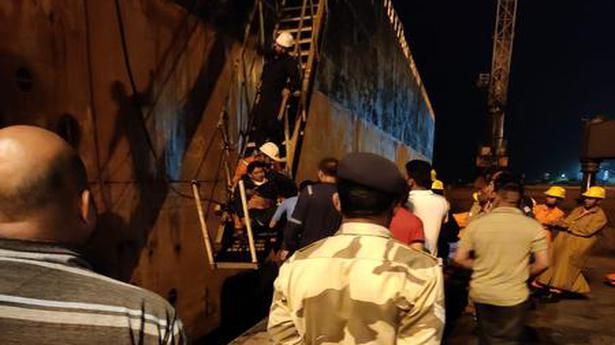 In the early hours of Friday, the Indian Coast Guard evacuated 30-year-old crew member of a vessel passing through the New Mangalore Port.

According to an official press release, Sonu Soni of MV Vishva Prena injured his neck while lashing the crane hook. MV Vishva Prena was on passage to Kochi and had been casted off from New Mangalore Port.

The shipping vessel was asked to head closer to the Port from where the injured crew member was evacuated. He was safe and undergoing treatment at a private hospital in Mangaluru, the release said.

Keeping in view that the day temperature during summer would be at its peak in the months of April and May, the State government has revised the schedule of functioning of government offices from April 1 to May 31 this year in all the six districts of Hyderabad-Karnatak region — Ballari, Kalaburagi, Bidar, Yadgir, Koppal […]

The Tobacco Board has suspended auction of tobacco across all its 10 platforms in the State in the wake of the lockdown declared by the State government to combat the COVIDd-19 outbreak. The suspension comes at the fag end of the auction season when barely two million kgs of tobacco is remaining to be auctioned. […]

Five of a family test positive in East Godavari district

Five persons of a family tested positive for COVID-19 after another member of the family, a 28-year-old woman, was declared positive for the virus on Saturday. The family resides in the Mangalavarampeta area under Rajamahendravaram Municipal Corporation (RMC) limits in East Godavari district. “One of the five persons is a Delhi returnee. The remaining four […]