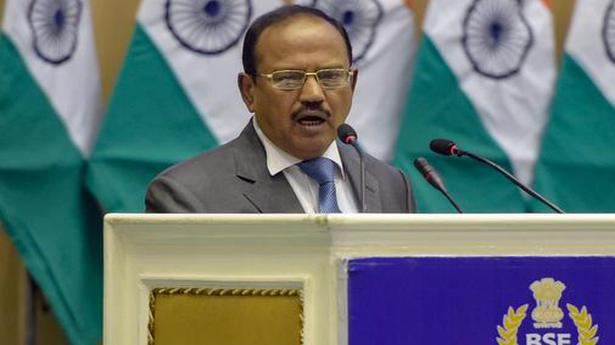 National Security Advisor (NSA) Ajit Doval chaired a high-level meeting in Srinagar on September 26 during which he directed security officials to intensify anti-militancy operations, but ensure that there is no collateral damage to civilians in Jammu and Kashmir, officials said.

Mr. Doval, who was on a day-long visit to Srinagar and returned to the national capital on September 25, held a series of meetings with security officials and bureaucrats during which he made it clear that common people should be able to exercise their daily routine without any fear from terrorist groups, they said.

This is his second visit after the Centre abrogated provisions of Article 370 in the State on August 5 and bifurcated it into Union Territories of Jammu and Kashmir, and Ladakh, which will come into being on October 31 with the swearing-in ceremony of first Lt. Governors.

During the meeting, the NSA reviewed the developmental schemes for people and asked officials for their speedy implementation, which includes providing best health care, shipment of apple boxes out of the Kashmir Valley, among other things.

The NSA also reviewed the security situation and directed the officials to intensify anti-militancy operations and target key terrorists operating in certain parts of the Valley, the officials said.

However, Mr. Doval cautioned that while operating against militancy efforts should be made to ensure that there is no collateral damage to civilians or their property, they said, adding that the move comes after reports that terrorists had been intimidating civilians and apple growers and enforcing civilian curfew.

The NSA had camped for 11 days in the Valley after the Centre announced its decision to withdraw the special status of Jammu and Kashmir. During that period, Mr. Doval had ensured that there was no violence in the aftermath of the government’s decision.

The NSA has been monitoring the situation in the State on a day-to-day basis to ensure flawless coordination between all arms of the security forces in the hinterland as well as along the Line of Control (LoC).

No new cases in Kannur

Kannur heaved a sigh of relief as three COVID-19 patients recovered and no fresh cases were reported in the district on Friday. Three patients who were undergoing treatment at the COVID-19 Treatment Centre at Anjarakandy were discharged. With this, out of 111 persons who tested positive in the district, 54 have been discharged. As many […]

The Indian Medical Association has appealed to the Chief Minister to conduct a detailed investigation into the propaganda unleashed on social media, apparently deliberately, against deceased donor organ donation which has adversely affected Mrithasanjeevani, the State government-run deceased donation programme. The IMA said that an organised mafia seemed to be in play in the State, […]