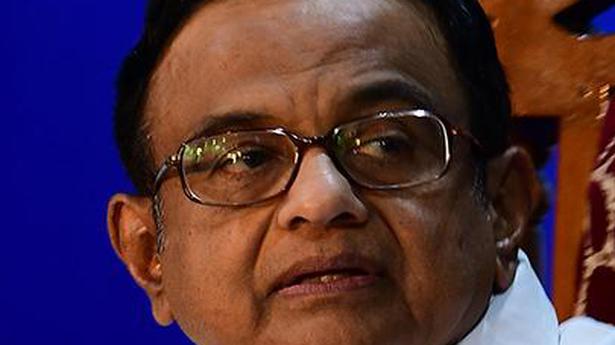 At the outset, Solicitor General Tushar Mehta, appearing for the ED, told Mr. Kuhar that there is a finding by the Supreme Court that custodial interrogation of Mr. Chidambaram is necessary.

Money laundering is a separate offence, Mr. Mehta said and moved an application for Mr. Chidambaram’s arrest and remand.

The plea was vehemently opposed by senior advocate Kapil Sibal, appearing for Mr. Chidambaram, who said that the CBI has already taken remand and ED has no ground since the offence is the same.

“CBI has already sought his custody for investigating payment and companies abroad, which the ED wants to probe now,” he said.

Mr. Sibal urged the court to recall its order by which Tihar authorities were directed to produce Mr. Chidambaram before it.

Mr. Chidambaram is in judicial custody till October 17 in the INX Media corruption case filed by the CBI.

The ED had on Friday moved a plea seeking production warrant of the 74-year old senior Congress leader.

The probe agency said in its plea that it requires custodial interrogation of Mr. Chidambaram in the money laundering case related to INX Media.

Rejecting the investigation by the local police station, trafficking survivors in West Bengal are seeking probe by Anti Human Trafficking Unit (AHTU) to ensure that the perpetrators are arrested. In February 2020, Sahiba (name changed), who was rescued in 2017 from Pune, approached senior police officers of Baruipur police district in South 24 Parganas demanding […]

Where ‘tribes’ of an ailing tea industry hold the key

Dev Kanta Barooah, the Congress president during the Emergency, had no qualms about saying that the party depended on Ali-Coolie-Bangali for votes. Ali stood for migrant Muslims, Coolie – a British pejorative – for tea plantation workers and Bangali for migrant Bengali Hindus. Together, they are more than 60% of Assam’s 21,760,604 voters. The Congress […]

Union Home Minister Amit Shah has cancelled his visit to two Northeastern states — Meghalaya and Arunachal Pradesh — on Sunday and Monday next, officials said. The cancellation comes amidst widespread protests in Assam and Meghalaya against the Citizenship (Amendment) Act, 2019. The home minister’s visit to the Northeast has been cancelled, a home ministry […]