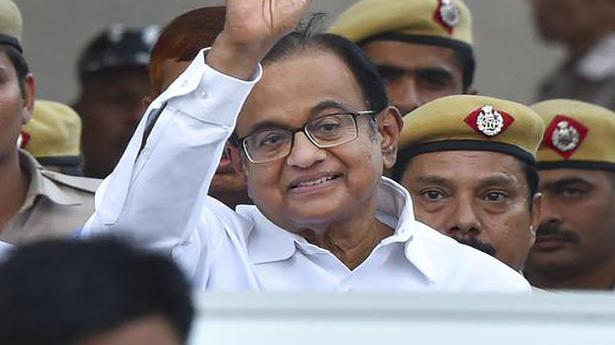 Justice Suresh Kait issued a notice to the Central Bureau of Investigation (CBI) on Mr. Chidambaram’s bail plea in which he has claimed that the criminal proceedings against him were “mala fide” and borne out of “political vendetta”.

The court asked the CBI to file a status report on the plea within seven days and listed the matter for further hearing on September 23.

The 73-year-old Congress leader withdrew from the High Court his plea challenging the trial court’s order remanding him to judicial custody till September 19, after the judge asked as to why he has filed two separate petitions.

The court allowed Mr. Chidambaram’s submission and said the petition is “dismissed as withdrawn”.

Solicitor General Tushar Mehta, representing the CBI, opposed the bail plea saying the case was at pre-charge sheet stage and the alleged corruption took place in 2007.

Mr. Mehta and Central government’s standing counsel Amit Mahajan contended that during the investigation, it has emerged that Mr. Chidambaram used his official capacity for corrupt practices and received crores of rupees and FIPB approval was granted.

Senior advocate Kapil Sibal, representing Mr. Chidambaram, sought bail for the Congress leader saying the alleged incident is of 2007 and the FIR was lodged by the CBI in 2017 and the offences carry a maximum of seven years punishment.

‘Same food for everyone in prison’

The court rejected the oral prayer of Mr. Sibal that Mr. Chidambaram was old and he be allowed to have home-cooked food in jail and to meet his family members daily.

“Sorry, it cannot be given,” the judge said, adding that same food is available for everyone in prison and even 84-year-old INLD chief O.P. Chautala, who in serving 10-year-jail term in JBT teachers scam, consumes food cooked in jail.

As per the jail manual, family members of an undertrial can visit him twice a week and home-cooked is allowed only under specific circumstances.

The Solicitor General said Mr. Chidambaram’s family members are already visiting him in jail twice a week and as a state “we cannot distinguish” between Mr. Chidambaram and other inmates.

His son Karti was present in the hearing in the High Court.

Mr. Chidambaram, who was arrested on August 21 by the CBI, did not approach the trial court and had directly filed the regular bail plea in the high court.

He has sought bail saying that he is a law-abiding citizen having deep roots in the society and is not a flight risk and is willing to abide by all conditions as may be imposed by the High Court while granting him the relief.

He claimed in his petition, filed through advocate Arshdeep Singh, that he has always cooperated in the investigation and will continue to do so in future as and when called by the investigating agency or the trial court.

All other accused in the case, including his son mr. Karti and INX Media former promoters Indrani and Peter Mukherjea, have already been enlarged on regular bail or anticipatory bail or statutory bail, he said.

The CBI had registered an FIR on May 15, 2017, alleging irregularities in the Foreign Investment Promotion Board (FIPB) clearance granted to the INX Media group for receiving overseas funds of ₹305 crore in 2007 during Mr. Chidambaram’s tenure as the Finance Minister.

Mr. Chidambaram, who was the Union home minister and the finance minister during the UPA rule from 2004 to 2014, was arrested by the CBI on August 21 from his Jor Bagh residence.

An eight-year-old girl was allegedly raped by a 40-year-old man at Jagannadharapuram village under Anakapalle (Rural) police station limits. The incident came to light after the girl’s parents lodged a complaint with police on Saturday. It was learnt that the accused person is a neighbour of the girl’s family. According to Anakapalle (Rural) Inspector P.V. […]

State to have skill varsity and multi-skill development centres soon

The State will soon have a Skill University besides a multi-skill development centres in every constituency in the State to train and make the youth industry-ready, said Chairman of the AP State Skill Development Corporation (APSSDC) Challa Madhusudhan Reddy here on Friday. Addressing a press conference at the corporation office in Tadepalli, Mr. Reddy said […]