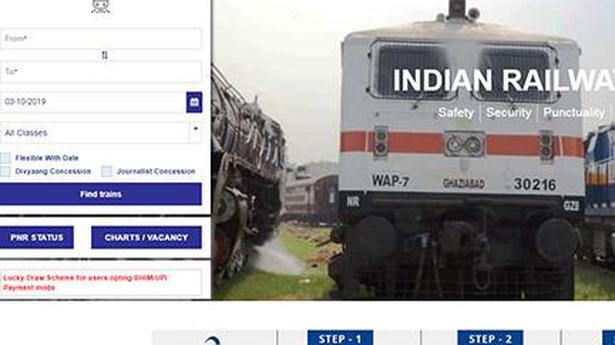 Shares of Indian Railway Catering and Tourism Corporation (IRCTC) made a strong debut on the bourses on Monday, surging to over ₹600 apiece — a significant premium over its issue price of ₹320.

On BSE, IRCTC shares were trading at ₹644 at 9:45a.m., which was more than double its issue price even as the benchmark Sensex was only marginal up at 38,234.

At the current trading price, the market capitalisation of the government company is pegged above ₹10,000 crore.

The listing of IRCTC was keenly awaited after its public issue created a record in terms of subscription for a government offering.

Also read: Explained | Why the rush for the IRCTC public offer

Meanwhile, the IPO of IRCTC witnessed strong demand from all categories of investors. The portion reserved for high net worth individuals was subscribed over 354 times, while that reserved for retail investors got subscribed 14.65 times.

The segment reserved for employees, which historically has seen low subscription numbers, was also subscribed 5.79 times.

Incidentally, the company has offered a discount of ₹10 to applicants in the retail and employees categories.

Institutional investors had also put in large bids with the segment getting subscribed nearly 109 times.

IRCTC is the railways’ online ticketing, tourism and catering arm and the only entity authorised by the Ministry of Railways to provide catering services to railways, online railway tickets and packaged drinking water at railway stations and trains in India.

‘PM has no right to seek votes, as he didn’t help the cyclone-hit’

DMK president M.K. Stalin on Thursday said Prime Minister Narendra Modi had no moral right to seek votes from the electorate of Tamil Nadu as he had failed to visit the areas affected by Cyclone Gaja, which threw life out of gear for thousands of people, especially farmers. Addressing a well-attended election meeting at Musiri […]

The Bombay High Court on Monday extended till December 6 the interim protection from arrest for professor Anand Teltumbde and writer Gautam Navlakha, who are charged in the Bhima-Koregaon violence case. Advocate Yug Chaudhry told Justice P.D. Naik that the Pune Police filed the affidavit opposing Mr. Navlakha’s anticipatory bail plea on November 26, but […]