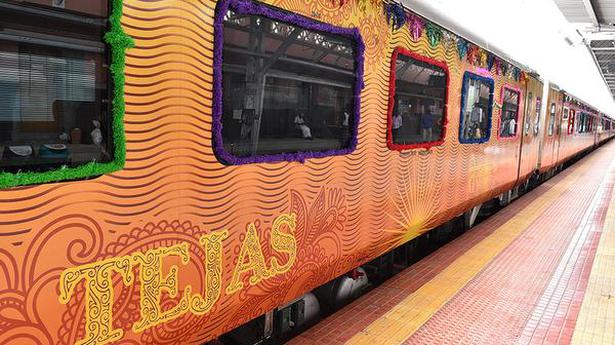 A delay of more than three hours in the running of the Delhi-Lucknow Tejas Express on October 19 has cost the IRCTC around ₹1.62 lakh which the railway subsidiary will pay through its insurance companies as compensation to around 950 passengers, a first in the history of the Indian Railways, officials said on Monday.

One official said each passenger can avail himself of the compensation through a link of the insurer provided with every ticket.

He also said the delay on October 19 had been caused by a derailment near Kanpur.

Since it began commercial operations from October 6 for six days a week, the train has maintained a tight schedule. On October 20, the Lucknow-Delhi Tejas reached 24 minutes late while the Delhi-Lucknow Tejas arrived right on time.

Under the IRCTC’s policy, ₹100 would be paid in case of delay of over an hour and ₹250 for delay of over two hours, the IRCTC said ahead of the launch of its first train.

The travel insurance includes a cover of ₹1 lakh against household theft and robbery during the travel period of the passengers, again a first for those travelling on board trains.

Five-star hotels must give explanations for overpriced bananas, eggs: Paswan

Five-star hotels charging exorbitant rate for food items like bananas and eggs is ‘unfair trade practice’ and the government will seek explanations from them, Food and Consumer Affairs Minister Ram Vilas Paswan said on Tuesday. Mr. Paswan was referring to a video, that recently went viral, in which actor Rahul Bose was seen complaining about […]

GST Council may give 1-year extension to anti-profiteering authority

The GST Council is likely to extend till November 30, 2020 the tenure of the National Anti-profiteering Authority (NAA), which deals with customer complaints regarding not receiving tax cut benefits, at its next meeting on June 21, an official said. The Council at its 35th meeting, the first under new Finance Minister Nirmala Sitharaman, is […]

Deputy Commissioner M.V. Venkatesh has urged the officials concerned to be prepared for controlling and eradicating locusts, if they enter the distric Source: thehindu.com Related