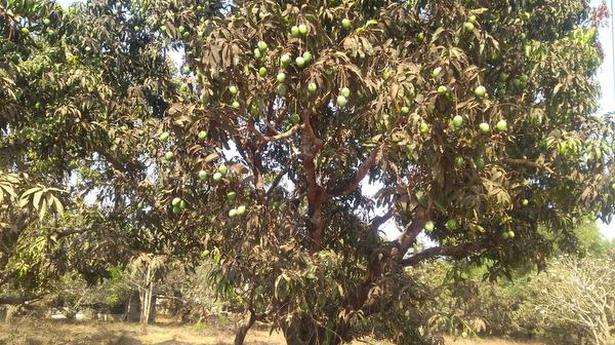 A local mango variety called Ishad, the pulp of which has been extracted for over a century for making value-added products, is facing the threat of becoming rare in its homeland, Ankola of Uttara Kannada district, thanks to competition from hybrid varieties.

But hopes of its revival are not completely lost as a cooperative society, Hichkad Group Vividhoddeshagala Sahakari Sangha Niyamita, in this coastal town continues to extract and market its pulp under the brand name ‘Oriental (Ishad Mango Pulp)’, though in small quantities.

Extraction and marketing of Ishad mango pulp has an interesting background, Shivananda Kalave, a Sirsi-based environmentalist, writer and green activist, told The Hindu. Oriental Canneries and Industries set up a unit in Ankola in 1908 to extract pulp from Ishad for making value-added products. The then Bombay government supported it by supplying wood. The pulp, which was also being exported, was being marketed by the then Bombay-based Veerachand Panachand Company. An old marketing brochure printed at Basel Mission, Mangaluru, says that the pulp was used for making juice, syrup, salad and ice cream. According to the brochure, the pulp could be used for making 48 recipes. It was being used in the United States, Australia and Sri Lanka.

According to the brochure, the Hichkad Group purchased the processing unit in 1970 for ₹95, Mr. Kalave said.

Pundalik Prabhu, president of the Hichkad cooperative society, said the pulp, which is thick, is still being marked under the old brand name. The production of pulp dropped from 20,000 tins a year a decade ago to between 10,000 and 12,000 tins now owing to shortage of mango as their trees are becoming rare. Each tin weighs 850 grams.

The mango, harvested from mid-May, has a short shelf life of not more than two or three days. But its pulp lasts more than a year, Mr. Prabhu said, adding that now it was not being exported from the cooperative society. The main demand for the pulp is from Mumbai and Hubballi, he added.

Some farmers did try to grow it outside Ankola taluk, but failed. It yields abundantly in Ankola, Mr. Prabhu said.

A small quantity of the fruit is being marketed in Hubballi, Belagavi and Mangaluru during the season. “It is delicate to handle given its short shelf life. Hence, the fruit cannot be transported to faraway places,” he said, adding that the demand for the pulp has not come down as about 95% of the pulp made by the cooperative is sold every year. But there is a need to conserve this variety, Mr. Prabhu said.

At these wedding processions, it’s yesterday once more

On a dark stretch in Anupshahr, a quiet town on the banks of Ganges in western Uttar Pradesh, Manish Kumar, the 25-year-old lead vocalist of Anil Band, is making a group of young wedding revellers dance to Pallu Latke. The all-male procession swaying to the Kishore Kumar-Asha Bhosle song from Nauker (1979) had no clue […]

Bus services hit in Karnataka after protests over Shivakumar arrest

Violent protests after the arrest of Congress leader D.K. Shivakumar have forced the Karnataka State Road Transport Corporation (KSRTC) to cancel bus services in Ramanagar district. On Wednesday morning, the KSRTC also suspended a majority of services between Bengaluru and Mysuru. An official of the KSRTC said that Bengaluru – Mysuru bus services were stopped […]

Defence Minister Rajnath Singh has approved a proposal to extend the period of retention of government accommodation by battle casualties from all the three Services to one year from the existing three months. “In view of the requirements and demands of the armed forces, the Ministry of Defence reviewed the existing provisions and recommended the […]