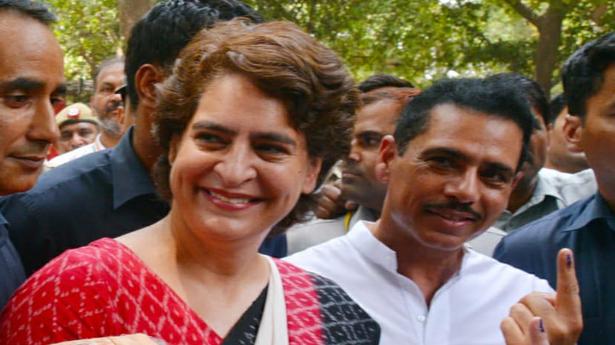 Congress leader Priyanka Gandhi on Sunday said it was “very clear” that the BJP will face defeat in Lok Sabha polls as people are “angry and distressed” and will convey their sentiments through voting.

Interacting with reporters after exercising her franchise, the senior party leader said, it was “very clear that the BJP government is going”.

“There is anger among people, and they are under distress. Modiji, instead of talking about real issues, has been talking about random things. And, now, they will express their anger against this government through voting,” the Congress general secretary said.

She said this will be witnessed especially in Uttar Pradesh.

The 20th edition of The Hindu Young World Quiz will be held at Sharnbasva Centenary Hall, Appa Public School campus, here on March 5. The event will be conducted in two categories. Students of classes 4, 5, and 6 will compete for the junior category, and those of classes 7, 8, and 9 will take […]

Social media is awash with Onam greetings, quite expectedly. Still, the one appeared on a Member of New Zealand’s Parliament took many by surprise on Tuesday, on the eve of Thiruvonam, the biggest festival for Malayalis across the globe. The greetings came from New Zealand’s Prime Minister Jacinda Ardern, who appeared in a Facebook video […]

Home Minister Amit Shah on Monday moved further amendments to the Arms (Amendment) Bill including provision of special status to sportspersons. “There were many discrepancies in the six-decade old law making crime control difficult,” he said while introducing the amendments in the Lok Sabha. “Many suggestions were received. I have moved an official amendment in […]