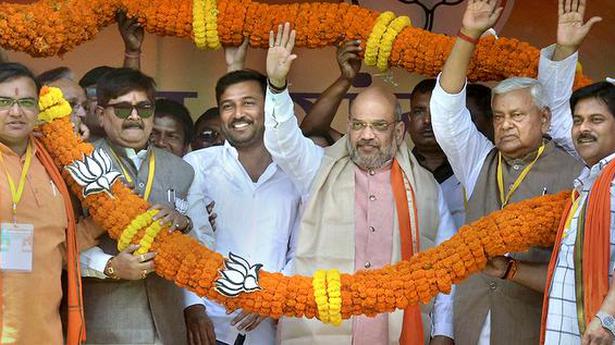 BJP president Amit Shah on Wednesday claimed that this Lok Sabha election is a fight between “3 Gs” of the Congress represented by the Gandhi family and those of the BJP exemplified by “gaon, gaumata and Ganga”.

Claiming that there is a wave in favour of Narendra Modi across the country, Mr. Shah also sought to compare a “workaholic” Prime Minister to a “vacation-loving” Congress chief Rahul Gandhi.

“For the Congress, 3G stands for Sonia (Gandhi), Rahul (Gandhi) and Priyanka (Gandhi). The BJP’s 3G are gaon (villages), gaumata (cow) and the Ganga,” Mr. Shah said and asked the people to choose the correct “3G”.

Mr. Shah claimed that Mr. Gandhi goes on vacations as soon as the temperature starts soaring during summer. “This [Opposition] alliance had kept the country’s security at stake for their vote bank. For us vote bank is not important. Elections will come and go, but security of the country is the topmost priority for us,” he said in rallies in Dhanbad and Jamshedpur.

Describing infiltrators as termites, the BJP leader said while the implementation of the National Register of Citizens will drive out intruders, the Congress seeks to raise the issue of human rights.

The Maha Vikas Aghadi (MVA) government will stand by the farmers through thick and thin, Chief Minister and Shiv Sena president Uddhav Thackeray declared on Wednesday, reiterating his government’s commitment to total farm loan waiver. He said his government was actively working towards this and could be rolled out in the coming days. “We have […]

As part of the ongoing 30-day village development programme, Collector Sarfaraz Ahmad took part in the shramdaan programme, removing weeds and cleaning the surroundings in Thimmapur mandal on Tuesday. The Collector, along with the villagers, also lifted the garbage onto a vehicle and advised them to keep their surroundings clean and check water stagnation as […]