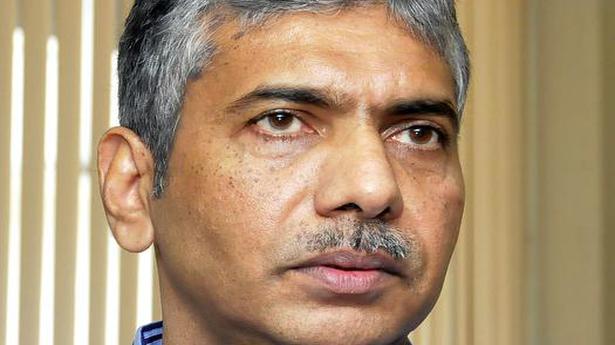 Director General of Police Jacob Thomas on Tuesday faced a bureaucratic hurdle that could stymie his bid to contest the Lok Sabha election from the Chalakudy constituency in Kerala.

Mr. Thomas told The Hindu that the State government had doubted whether his application for voluntary retirement he had mailed to the General Administration Department (GAD) last week was legally acceptable communication. It had also raised the issue of serving a minimum notice period that might run into months before the resignation is accepted.

Mr. Thomas said the IT Act acknowledged e-mail as a valid communication. He had filed a second application in hard copy form.

The DGP said the Centre’s newly liberalised service rules mandated that no State could force an officer to continue in service if he or she had completed 30 years. Mr. Thomas, an officer of the 1985 IPS batch, is currently under suspension on the charge of official misconduct for criticising government policy.

Mr. Thomas said he would contest on a platform of sustainable development platform under the aegis of Twenty20 Kizhakambalam (T20K), a registered political party. “I am going to the people with simple promises. My manifesto posits 12 points. For one, it says that if elected I would strive to enhance the fast depleting groundwater level in Chalakudy by three feet in wells”, he said.

Clean air, pure water, zero waste, mobilisation of local resources to generate employment are his other talking points. Mr. Thomas said he was not propounding any mega projects. “I am speaking about a self-sufficient village and green economy,” he said.

Mr. Thomas’s bid to make an off-centre entry into the electoral fray has interfered with traditional political calculations in Chalakkudy, which, in mid-March, seemed to be set for a conventional four-pronged contest between incumbent Innocent of the LDF, UDF convenor Benny Behanan, A. N. Radhakrishnan of the BJP and Roy Arackal of the SDPI.

T20K, which won 17 of the total 19 wards in Kizhakambalam panchayat in 2015, reckons that Mr. Thomas would bring his image as a hard-charging anti-corruption crusader and outspoken critic of the ruling front to the party’s maiden Lok Sabha bid.

Sabu Thomas, the owner of a significant textile brand in Kerala, had launched T20K in 2013 as part of his company’s social responsibility initiative in Kizhakambalam, a suburb of Kochi in Ernakulam district, where his manufacturing hub is based.

If he enters the campaign, Mr. Thomas will find himself compelled to defend his candidature against the charges of bid rigging he faced as Director-Ports; an alleged alliance with a foreign entity to purchase large swathes of arable land in Tamil Nadu; and a forest offence case against his family in Karnataka.

Mr. Thomas has repeatedly denied the charges as malicious and ill-motivated and aimed at denting his public image.

A theatre troupe with a history of over 40 years has come out with a play to depict the Malnad region that has undergone significant changes over the years, owing to multiple factors — man-animal conflict, irrigation projects, infrastructure development, and heavy rain-causing floods. The play has been titled Aane Dariyalli Allola Kallola (Destruction, Devastation […]

Chief Minister K. Chandrasekhar Rao’s Independence Day speech has been “disappointing” with no mention of about pay revision commission to employees, interim relief, filling up of vacancies, enhancing retirement age and so on, said TS BJP chief K. Laxman on Friday. At a press conference at the party office in the presence of senior leaders […]

BJP, Congress spar over Pakistan’s letter to United Nations on Jammu and Kashmir

A letter from the Pakistan government to the United Nations, quoting Opposition leader Rahul Gandhi on Kashmir, has sparked a war of words between the Congress and the BJP. While the BJP has said Mr. Gandhi had “insulted” the country and sought an apology from him, the Congress accused the BJP of “doing cheap politics”. […]