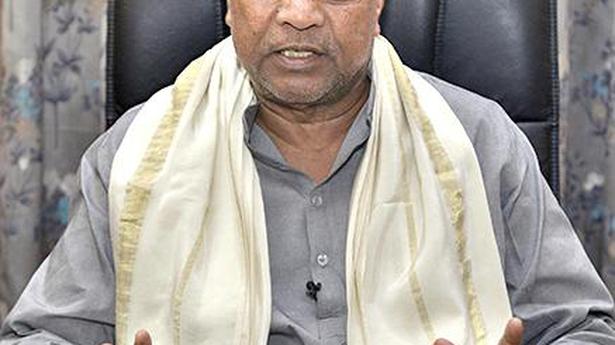 Former Chief Minister and the head of the coalition government coordination committee, Siddaramaiah has hinted that the resignation of Congress MLA Umesh Jadhav may not be accepted.

Speaking to press persons at Hubballi Airport on March 5, Mr. Siddaramaiah said that it was difficult to accept the resignation of Umesh Jadhav as per the law. However, he said that it was ultimately left to the discretion of the Speaker to accept it or not.

Mr. Siddaramaiah said: “Mr. Umesh Jadhav was elected on Congress ticket and now has become a prey in Operation Lotus. I myself have given a complaint to the Speaker seeking action against four dissident MLAs under anti-defection law”, he said.

He said anti-defection law would apply to them and he believed that the resignation would not be accepted. All the four dissident MLAs were involved in party defection activities and the people of the state were talking about an exchange of ₹25cr to ₹30cr for the defection, Mr. Siddaramaiah said.

On the poll plans of film actor Sumalatha, Mr. Siddaramaiah said that it had been now decided that the seat would be left for JDS to contest and contesting as an independent candidate was left to Ms. Sumalatha

He further clarified that the seat-sharing process was on and would be finalised in three to four days.

The Supreme Court on Monday clarified that pending matters concerning fugitive businessman Vijay Mallya before it will not affect proceedings in “any case anywhere in the world”. A Bench led by Chief Justice of India Sharad A. Bobde passed the order after Solicitor General Tushar Mehta said Mr. Mallya had cited cases pending in the […]

Michael Debabrata Patra has been appointed as the deputy governor of the Reserve Bank of India (RBI), according to a Personnel Ministry order. He has been appointed to the post for a period of three years, it said. Mr. Patra, who is looking after the monetary policy department as the executive director, will be the […]

Steps to be taken to stabilise the sector, says Minister Source: thehindu.com Related