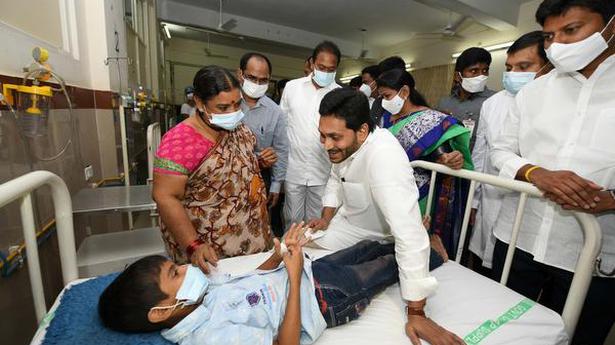 Chief Minister Y.S. Jagan Mohan Reddy visited the Government General Hospital (GGH) here on Monday and enquired about the condition of the patients suffering from symptoms of an undiagnosed disease. He directed the ministers and officials to monitor the situation round the clock.

Hundreds of patients complained of dizziness and epilepsy-like symptoms for the last three days in Eluru town and the neighbouring areas.

Mr. Reddy interacted with the patients and also spoke with the doctors about the treatment being given to them. He directed the officials to ensure better treatment and supply of medicines and nutritional diet to the discharged patients.

Later, Mr. Jagan Mohan Reddy reviewed the situation with the medical and health and revenue officials. He sought details like the number of cases reported, discharged patients, referral cases and their health condition and the line of treatment.

Asserting that electoral ups and downs are inevitable, Congress president Sonia Gandhi on Thursday said challenges facing the party are formidable but it must continue its ideological struggle against forces of divisiveness. Addressing an event marking Rajiv Gandhi’s 75th birth anniversary, Sonia Gandhi said in 1984 her husband got a massive poll mandate, but did […]

Where greenery and industrialisation go hand in hand

Sunni Waqf Board to seek review of Ayodhya verdict

Expressing its dissatisfaction with the Supreme Court verdict that cleared the way for the construction of a Ram Temple at the disputed site in Ayodhya, the Sunni Waqf Board said on Saturday that it will seek a review of the judgment. The apex court directed the Centre to allot a five-acre plot at an alternative […]