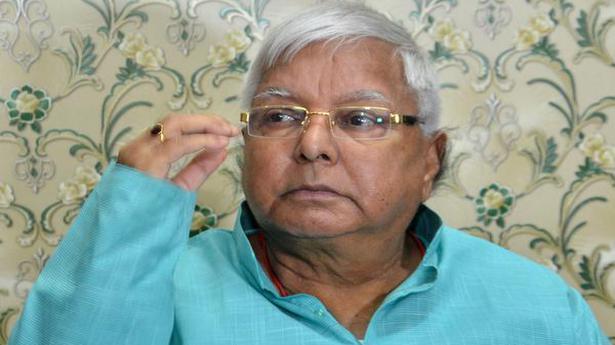 Incarcerated Lalu Prasad was on Tuesday re-elected as the national president of his Rashtriya Janata Dal for the 11th consecutive term, though the charismatic leader remained conspicuous by his absence here on the occasion.

Prasad, who had founded the party in 1997, is at Ranchi serving sentences in fodder scam cases and his nomination papers were submitted at the RJD State headquarters by his sons Tejashwi Yadav and Tej Pratap Yadav.

He was subsequently declared elected unopposed.

Sonia Gandhi wishes all on occasion of Id

The Enforcement Directorate has identified 14 entities to which the IL&FS Financial Services (IFIN) had extended loans to the tune of ₹2,270 crore that remained unpaid. The funds were allegedly routed to the IL&FS Transportation Networks Limited (ITNL) and its subsidiaries as loans at higher interest rates. Based on the documents seized during the investigation, […]

Amid the novel coronavirus pandemic, the State government on Thursday transferred Dr. Ajay Chandanwale, dean of the government-run Sassoon General Hospital, one of the two main centres for treating COVID-19 patients in Pune. Dr. Murlidhar Tambe, deputy dean of B.J. Medical College and Sassoon General Hospital, has been given interim charge. Dr. Chandanwale said he […]