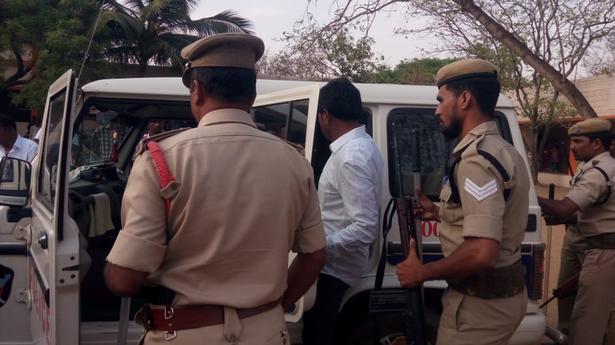 A Jana Sena Party candidate from Guntakal in Andhra Pradesh was arrested after he damaged an Electronic Voting Machine (EVM) on Thursday as polling for the 25 Lok Sabha seats and 175-member Assembly was underway in the State.

Mr. Gupta, who had come to cast his vote at the polling station in Gutti, was angry with the polling staff over names of Assembly and Parliament constituencies not being displayed properly.

He lifted the EVM and threw it on the floor. The machine was damaged in the incident. Gupta was immediately arrested after the incident, the police added.

Anantapur district registered just 10.62% of polling by 9 am, since voting got delayed in several places and violence raised its head.

People came to the polling booths as early as 6.30 am, but were disappointed with EVMs not working till 10 am at many places in Anantapur district. While some people went back home, police personnel had tough time controlling impatient voters.

In Singanamala (SC) constituency, there were clashes between YSRCP and TDP followers in Jangampalli village of Yellanur mandal.

Actor Nandamuri Balakrishna and his wife cast their votes at MPDO office in Hindupur town from where he is contesting.

Madhya Pradesh Chief Minister Kamal Nath has dared senior party leader Jyotiraditya Scindia to carry out his threat of taking to the streets over unfulfilled promises in the party manifesto, saying “let him do”. Mr. Scindia told presspersons that “If the Congress makes a promise, it meets it. Otherwise, we will have to take to […]

Digital mapping of unauthorised colonies in Delhi by Dec. 31

Urging people to be more hygiene conscious and responsible in keeping their surroundings and roads free of litter, Finance Minister T. Harish Rao has suggested imposing penalty on litterbugs and said that sarpanches should implement Palle Pragati efficiently to bring about positive changes in their respective village. The second phase of the programme will commence […]