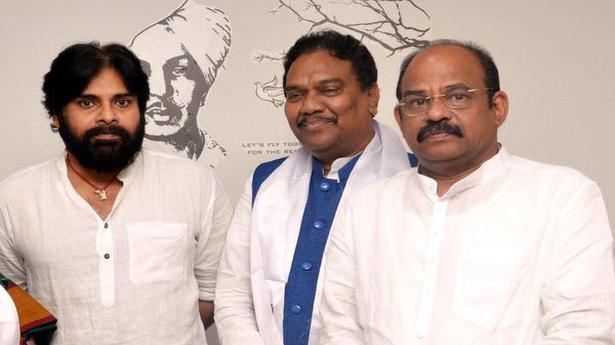 Jana Sena Party (JSP) has released the first list of candidates for four Lok Sabha (LS) and 32 Assembly constituencies a few hours before the party’s formation day celebrations began at Rajahmundry on Thursday.

Businessman and philanthropist Gedela Srinibabu is the JSP candidate for the high-profile Visakhapatnam LS constituency while party general secretary Chintala Parthasarathy is being fielded from Anakapalli.

For the Assembly constituencies, former Speaker of the Legislative Assembly, Nadendla Manohar is the most prominent one being fielded from Tenali. Former MLA Ravela Kishore Babu, who quit TDP, has been picked up for Prathipadu (SC) seat in Guntur district.

Former minister Pasupuleti Balaraju has got the nomination from Paderu constituency in Visakhapatnam district.

BJP to finalise seat sharing with Shiv Sena in Maharashtra

The Bharatiya Janata Party (BJP) hopes to finalise seat sharing arrangements with the Shiv Sena by September 22 or the upcoming weekend, ahead of the Assembly polls in Maharashtra, but is clear that the question of just who is the dominant partner has been settled in its favour. Senior party sources told The Hindu that […]

Sceptics and supporters of the project

There are some like D. Dhanuraj, chairman of city-based think tank Centre for Public Policy Research (CPPR), who are sceptical of the project. “I am not against the project. But passenger patronage is number (volume) driven. Many changes will happen in our lives in the coming years with the introduction of 5G, 3D printing, etc…” […]

The carving out of Ranipet and Tirupattur districts from the Vellore district has been welcomed by traders and industrialists. Ranipet is likely to comprise Arcot, Ranipet, Arakkonam and Nemili taluks and the Tirupattur may include Natrampalli, Ambur, Vaniyambadi and Tirupattur taluks. The remaining taluks of Katpadi, Vellore, Anaikattu, Gudiyatham and Pernambut are likely to be […]