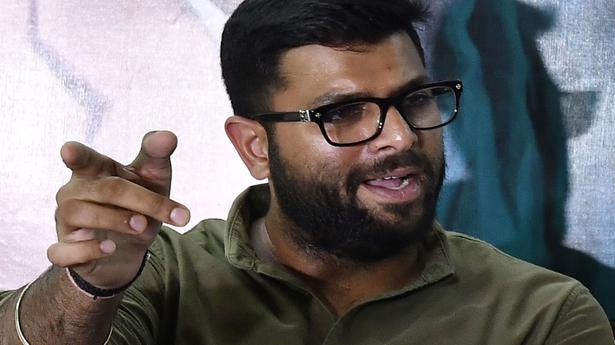 The announcement of JJP candidates came hours after the Congress made public its list of candidates for the five Lok Sabha seats in Haryana on Sunday evening.

Honoured with the NRI Bharat Samman in 2011, Mr. Khan, an MBA from IIM-Ahmedabad, has been an adviser to prominent companies and travelled across 75 countries in connection with his work. The lone Muslim candidate from Gurugram, he is pitted against the Bharatiya Janata Party’s (BJP) Rao Inderjit Singh and Congress’ Captain Ajay Yadav.

Mr. Chautala, a Jat, would be caught in a three-cornered contest with Mr. Hooda and the BJP’s sitting MP Ramesh Chandra Kaushik. He had lost to the BJP’s Krishan Middha in the Jind by-poll in January this year with the margin of around 12,000 votes. Sonipat is one of the three Jat-dominated Lok Sabha seats in Haryana, besides Rohtak and Hisar.

Contesting the Lok Sabha elections in Haryana in a coalition of the Aam Aadmi Party (AAP), the JJP, which was formed in December last year after a split in the Indian National Lok Dal (INLD), has mostly fielded young and educated candidates in a bid to appeal to around 56% electorate in Haryana below the age of 45 years. With its choice of candidates, the party, considered to have support mostly in the rural areas, especially among Jats, also attempts to woo the educated urban voters.

A vexed legal tangle awaits the Balakrishnan Nair committee constituted to look into the disbursement of compensation for Maradu apartment owners as the ownership of more than half of the total number of apartments is still with the builders. An initial assessment of the ownership records available with the Maradu municipality indicated that 191 of […]

Congress workers on September 4 staged protests and erected road blockades in Mysuru condemning the arrest of former Minister D.K. Shivakumar by the Enforcement Directorate. The busy Mysuru-Nanjangud highway was blocked by party activists led by former MLA M.K. Somashekar near Gundurao Nagar. Traffic was brought to a standstill for some time. The authorities later […]

Five police personnel have been suspended in connection with the death a 22-year-old Dalit man who was a suspect in a theft case, a senior Madhya Pradesh police officer said on Wednesday. Family members of the deceased Sanju Tipaniya have alleged that he died due to thrashing by the police personnel at Gandhi Nagar police […]