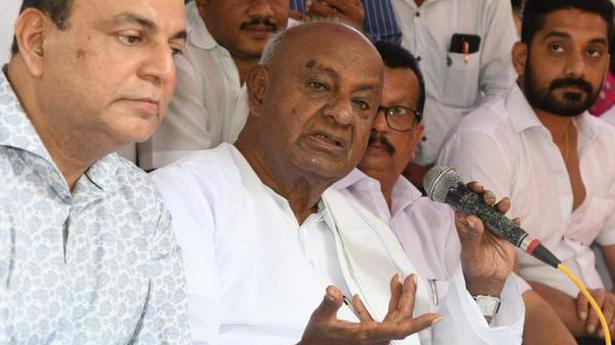 Janata Dal (Secular) president H. D. Deve Gowda on Sunday said the seat sharing between the coalition partners in Karnataka for the coming Lok Sabha polls will be finalised in two weeks. He also said his party is not rigid on getting its share.

Addressing the media ahead of attending a function in Mangaluru, Mr. Gowda said his party has demanded 12 of 28 Lok Sabha seats in the State. But the party will not press the Congress for all the seats demanded in view of keeping the coalition government intact.

“As a head of the party I will not give chance for the coalition government in Karnataka to face any danger,” he said.

Mr. Gowda said that though the Janata Dal (Secular) is not rigid on getting its share, he hoped that the Congress will also be not rigid on sparing seats to its coalition partner.

The coordination committee of the two parties will meet on March 4 and discuss about seat sharing which will be finalised later at the high command level.

The intention of the two parties is to curtail the growth of the BJP in the elections, he said.

The former Prime Minister said that when compared to the Lok Sabha seats in other states like Uttar Pradesh, Maharasthra, Tamil Nadu, Telangana and Andhra Pradesh, the seats in Karnataka did not matter much in having a say in the national level politics. The other states had more than 40 Lok Sabha seats.

The State government will host a farewell function for outgoing Governor E.S.L. Narasimhan at the Chief Minister’s camp office on Saturday. Chief Minister K. Chandrasekhar Rao, his Cabinet colleagues, MPs, MLAs, MLCs and higher officials, will be there at the farewell. Arrangements for the occasion were being made, sources said. Incidentally, Governor-designate Tamilisai Soundararajan will […]

Jammu and Kashmir Lieutenant Governor Girish Chandra Murmu on Thursday conveyed his greetings to the people of the union territory on the occasion of Source: thehindu.com Related