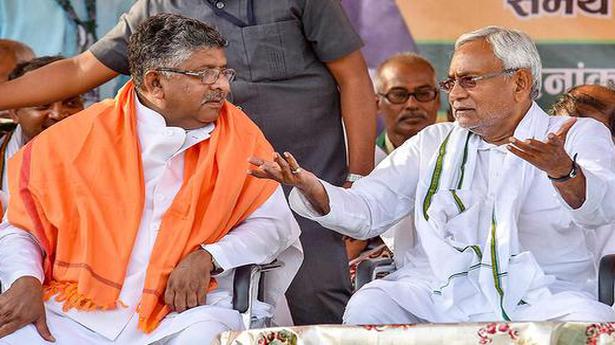 As the election campaign in Bihar enters the last stretch, the ruling JD(U) has apparently changed its campaign narrative and returned to its demand for special status for the State.

JD(U) leaders have also focussed more on development work by the Nitish Kumar government rather than issues of “muscular nationalism” or Prime Minister Narendra Modi’s “strong leadership,” which they were highlighting in earlier campaign speeches.

Recently, JD(U)’s principal general secretary K.C. Tyagi had urged voters of Bihar to give his party at least 15 or more MPs, promising that they would raise the issue of special status for Bihar again.

Out of total 40 Lok Sabha seats in the State, the JD(U) and BJP are contesting 17 seats each with the partner Lok Janshakti Party contesting the remaining six.

“We’ll put up a fresh demand for Bihar’s special status before the 15th Finance commission… a permanent solution to all round development of Bihar can be possible only if the State gets the special category status,” said Mr. Tyagi while speaking to presspersons in Patna. State JD(U) president Basistha Narayan Singh endorsed Mr. Tyagi’s statement.

The special status demands come alongside remarks from party MLC Gulam Rasool Balyawi that if NDA wants to come to power in 2019, they have to place Chief Minister Nitish Kumar in the forefront of the campaign.

Though Mr. Balyawi’s statement was rejected by both the BJP and the JD(U) leaders, Mr. Nitish Kumar did not respond to it. A senior State BJP leader told The Hindu that such statement in the middle of the poll campaign should have been immediately dismissed and refuted by Mr. Kumar, as a senior JD(U) leader.

“I’m surprised that a JD(U) leader can make a loaded statement at this crucial time without the go-ahead from top party leadership,” he said.

Speaking at election meetings in Nalanda and Aurangabad, the Chief Minister chose to highlight achievements of his government.

“My government has constructed good roads, brought electricity, given bicycles to students and done several welfare schemes for your development…I always believe in work and will continue to do so,” Mr. Kumar said. Other JD(U) leaders too have pitched the development plank. The changed narrative has not gone unnoticed in the opposition RJD and Congress.

“JD(U) must have seen what is written on the wall and have started singing the old tune of special status for the State….why they have not been raising this issue in first six phases of campaign and why they have started it now,” said RJD leader Tejashwi Yadav.

Senior State Congress leader and party MLC Premchandra Mishra also said, “It seems JD(U) has got hint of what is coming on May 23… They must also have drawn some conclusion from what senior party leader Ram Madhav recently said that the BJP would require the support of allies to form the next government at the centre. But, I would say it has become too late for them.”

However, State BJP leaders asserted that “along with its alliance partners like JD(U) and LJP, the NDA will form the government under the leadership of Prime Minister Modi.”

Convicts Akshay Singh and Pawan Kumar Gupta on Saturday moved a Delhi court seeking a stay on the execution of death warrants against all four, scheduled for March 3, in the Nirbhaya gang rape and murder case. Additional Session Judge Dharmender Rana issued notice to Tihar Jail authorities on the plea of Singh, directing them […]

The Enforcement Directorate on Wednesday said a consortium of banks led by the State Bank of India (SBI) recovered ₹1,008 crore by disposing of the United Breweries shares, owing to its proactive action in the money laundering case against fugitive Vijay Mallya. “Based on the submissions made and proactive steps taken by the ED, and […]