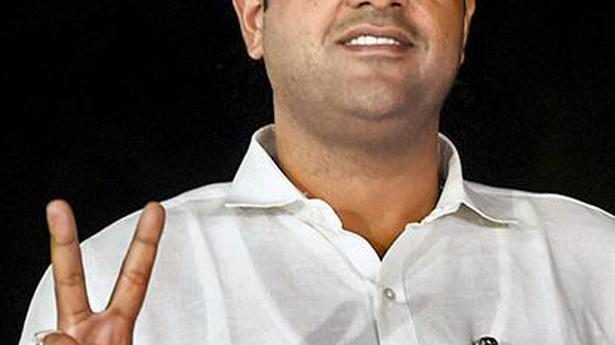 Supporters of the Jannayak Janta Party (JJP) have been venting their anger on social media platforms over the party’s decision to extend support to the BJP to form government in Haryana.

The supporters, mostly youth, have been posting angry messages and videos accusing JJP leader Dushyant Chautala of “betrayal” and “going back on his words”.

The supporters uploaded videos on Tiktok, a social media video app, burning the flags and bands of the party. They accused Mr. Chautala, the former Hisar MP, of betraying the mandate to the party which, they claimed, was against the BJP.

The JJP, formed after a split in the Indian National Lok Dal in December last, won 10 seats to emerge as a kingmaker in the State following a fractured mandate, with both the BJP and the Congress falling short of the majority mark in the 90-member Assembly. The party had extended support to the BJP based on a Common Minimum Programme which includes 75% reservation to local youth in jobs in Haryana and increase in old-age pension.

The core vote bank of JJP comprises the Jats, a dominant caste in Haryana, who are believed to have voted against the BJP accusing it of caste-based politics targeted against them. Around 20 people, mostly Jat youth, had died in police firing in 2016 during the BJP rule, further pitting the community against the party.

A large majority of Jats in rural areas are also engaged in farming and the farmers’ distress has been a major issue this election. The farming community has been angry with the BJP allegedly for failing to implement the Swaminathan Commission report.

The messages on social media platforms comprised videos of Mr. Chautala at various political meetings attacking Prime Minister Narendra Modi and the BJP. The supporters also shared an old video of Mr. Chautala’s grandmother from a hospital bed accusing him of betraying her husband Om Prakash Chautala for his political ambitions. Some party cadres vowed not to support the party ever again.

A few others said that they could accept the JJP supporting the Congress, but not the BJP.

Congress Communication Chief Randeep Singh Surjewala also tweeted a video of Mr. Chautala’s mother and Badhra MLA Naina Singh saying that the JJP would never tie up with the BJP.

The Supreme Court on Tuesday granted bail to 17 convicts in the 2002 post-Godhra riots case in which 33 Muslims were burnt alive, and asked them to relocate to Madhya Pradesh and do community service. A Bench comprising Chief Justice S.A. Bobde and justices B.R. Gavai and Surya Kant divided the convicts in two groups […]