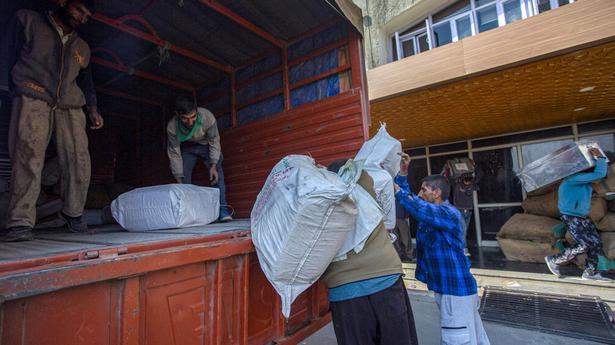 As Jammu and Kashmir is all set to be downgraded and bifurcated into two Union Territories on October 31, there is concern among the bureaucracy regarding choice of posting. Since many officials are not willing to move to Ladakh, the Centre was planning a compulsory one-year “short stint” of State administration officials to the new Union Territory that will also come into existence on October 31. Unlike the UT of J&K, Ladakh will not have a Legislative Assembly and will be governed by the Lieutenant Governor through the Ministry of Home Affairs (MHA).

The All India Services officers, the Kashmir Administrative Service (KAS) and the Kashmir Police Service (KPS) officers are wary of being posted outside the State and “outsiders” coming to the State.

Many officials The Hindu spoke to said there was consternation among the AIS officers of the J&K cadre over merger with the Arunachal Goa Mizoram and Union Territories (AGMUT) cadre.

The KAS and the KPS officers are wary of being posted to Ladakh that suffers from a huge shortage of manpower.

There are around four lakh State government employees, 67 IPS and 58 Indian Forest Service (IFS) officials in erstwhile J&K. A senior official said J&K has 67 IAS officers against the sanctioned strength of 138. Of them, 15 are on Central deputation.

The J&K Reorganisation Act, 2019 was passed by Parliament on August 6.

As per the Act, IAS, IPS and other Central service officers will continue to serve in the two successor UTs while new recruits will be allocated the AGMUT cadre.

Earlier, the AIS officers had given a representation to J&K Chief Secretary B.V.R Subrahmanyam expressing concern on merger with the AGMUT cadre. Mr. Subrahmanyam is a 1987 batch IAS officer from Chhattisgarh cadre who was handpicked by the Centre to serve in J&K after the BJP-PDP alliance broke and the State was put under Governor’s rule in June 2018.

“No one has approached us to know our preference yet. The formalities are still being chalked out. J&K is a special case and officers who come from outside should be mindful of the intricacies here. A small incident can also blow up here and take the shape of a major law and order situation that could linger on for months,” a senior AIS officer said.

This election season has seen increased participation by transgender activists in the state’s politics. The Prakash Ambedkar-led Vanchit Bahujan Aghadi (VBA) has appointed Disha Pinky Shaikh as its state spokesperson. The Nationalist Congress Party (NCP) has appointed Chandani Gore as vice-president of its women’s cell and Priya Patil as a member of the state working […]

The Srikalahasti police arrested nine persons in connection with a midnight ritual, believed to be a “tantric puja” performed at the sub-shrine of Kala Bhairava, on Wednesday. The shrine abuts the temple of Dakshina Kali Matha, considered a village deity, on the Veyyilingala Kona route. Though the nature of the ritual remained unclear, police grew […]